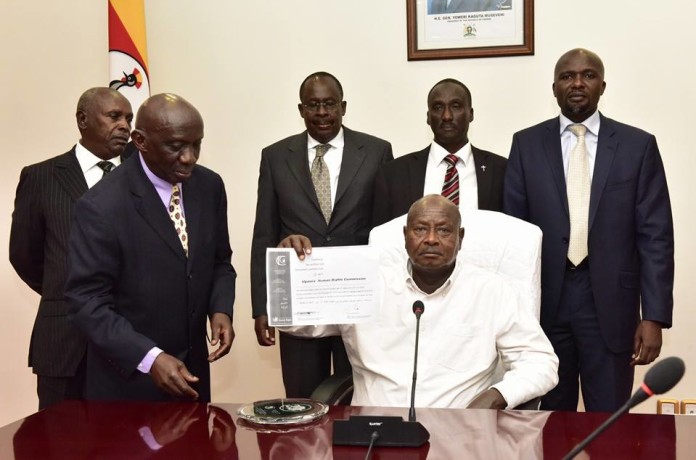 President Yoweri Museveni has assured the Uganda Human Rights Commission that the NRM government will increase the organization’s funding to enable it come out of donor dependence. The President gave the assurance yesterday at State House, Entebbe during a meeting with a delegation of Uganda Human Rights Commission, led by Acting Chairman of the Commission, Dr. Katebalirwe Amooti wa Irumba.

The President told the delegation that issues pertaining to remuneration are important because Commissioners should be adequately remunerated to ensure that they are able to concentrate on their work wholeheartedly. He assured the delegation that he will discuss the pertinent issues with the Ministry of Finance and Economic Planning for more funding to the Uganda Human Rights Commission.

Regarding the role of cultural leaders in the country, the President emphasized that it is unconstitutional for the cultural leaders to participate in partisan politics because they are charged with the responsibility of leading all the people irrespective of their subjects diverse political persuasions. He also stressed that those Ugandans that are involved in acts of violence will be held accountable for their actions.

Dr. Amooti wa Irumba also briefed the President on the work that is being undertaken by the Uganda Human Rights Commission, its achievements as well as its monitoring report on the just ended 2016 general elections. He commended the National Resistance Movement government for upholding human rights in the country saying that the Commission has continued to enjoy an uninterrupted work schedule that has made them to undertake their chores effectively.