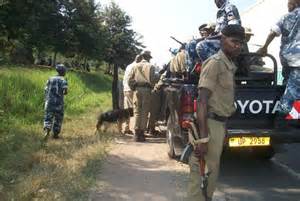 The Inspector General of Police, Gen.  Edward Kale Kayihura has assured the country that the situation in the western districts of Kasese and Bundibugyo districts has been contained.

“The situation is calming down, yesterday and today has been peaceful and the joint forces of police and army presence in both districts have eased the tension and we look to occupy them entirely.” The IGP said.

Gen .Kayihura disclosed that the joint force is fighting to dominate the whole of the districts in the region an effort to entirely curb the violence.

Attacks in Bundibugyo started on February 24, 2016 after the announcement of local council five chairperson result. Rivals supporters attacked each other, many were killed, houses were torched and others fled their homes. To this, the IGP says currently, families are settling and that “there are no more migrations.”

In Kasese various groups of people armed with clubs, pangas, spears, bows and arrow have attacked police and army officers on patrol, police posts have also been attacked.

The forces have killed about six attackers and injured several; police officers have also been injured in the clashes.

This prompted the Inspector General of Police to pitch camp in the region.

“These are not random attacks, they are organized criminality, some attackers have been killed and others have been captured, these will help us find out who is behind this.” said Gen.Kayihura.

He also added that the CIID in the region is working tirelessly and hunting for more of the attackers.

“The best defence is offence, and we are going after those people, we are currently succeeding, we have indicators of who might be behind this but we can’t make public statements now” he added.

The IGP said that both the cultural leaders of the Bamba and the Bakonzo agreed in unison to help police end this chaos.

Mr.Kayihura warned Ugandans to be be vigilant as according to police, there has been intelligence of an imminent Al-Shabaab attack on Uganda since January.