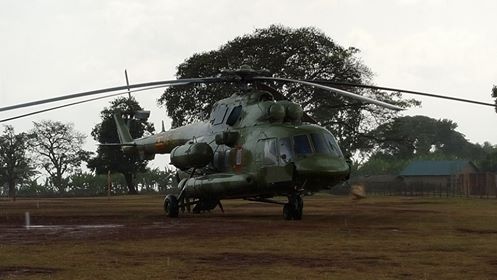 President Museveni accompanied by First Lady Janet Museveni on Wednesday afternoon flew to Sebei region where just like Rwenzori has been ravaged by post-election violence.

Mr. Museveni on arrival tasked the District Police Commander Kapchorwa, John Odokonyero to brief him about attacks on Kapchorwa Police Station were two police officers were hacked by locals who even walked away with guns.

The commander in chief of the armed forces has since Monday been touring Bundibugyo which has been an epicenter of the killings.

Mr Museveni, who was dressed in military attire, said: “I am going to deploy security in all areas to ensure that peace prevails in the area. Criminals who are hiding in Rwenzori region intending to cause insecurity in the region will be dealt with.”

He blamed cultural, political and religious leaders for not doing enough to end tribal clashes in the Rwenzori sub-region.

Police chief Gen Kale Kayihura recently asked residents use a newly set up call centre that will speed up action whenever one is attacked.  Residents accuse police of not responding in time.