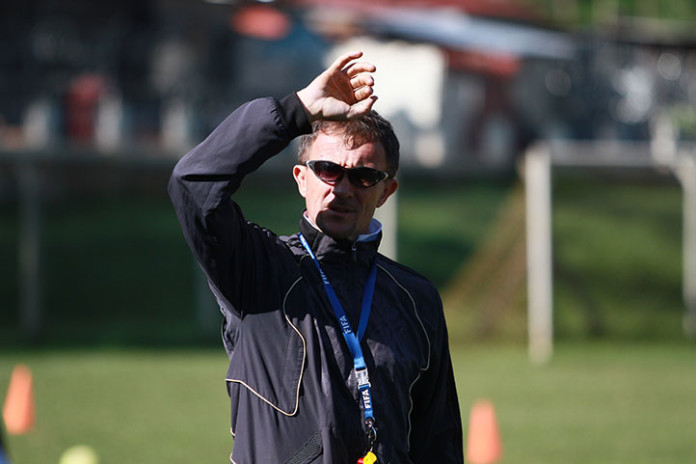 Cranes tactician Mulitin ‘Micho’ Sredojevic’s first day after Uganda fluffed their chances of making it to Gabon 2017 was a quiet one … with a source telling EagleOnline the Serbian was a “silent angry man.”

His employer Eng. Moses Magogo can hide behind the illusion Project 2019 Cameroon is but poor Micho was being blamed and castigated for the lack of quality and effectiveness of the Uganda Cranes even before the game ended.

Micho was apologetic about the missed chances blaming poor logistics for the shortcoming. As we previously reported, Uganda have always fallen short when it matter most and the Tuesday night disenchantment evoked memories of Kenya in 2011, Zambia in 2012 and Guinea just recently.

We’re told Micho is very disappointed with his strikers especially Geoffrey Massa and Farouk Miya for having failed to score what seemed as obvious opportunities. One source told us, “The mzungu is very pissed and some of those players will face his wrath next time there is a Cranes game.”

A Fufa source tells Eagle Sports, “From the moment he drove out of Namboole, everyone knew he was so irritated.”

Micho surely expected his boys to beat the visiting Burkinabe but now he is inclined to the fact that after the two fixtures, Uganda now lie second with seven points; same as Burkina Faso with Botswana third; a point adrift while bottom placed Comoros are just four points behind.  “It’s a disappointing result,” he told the press after a goalless draw with the Stallions. He knows next game is away to Botswana who have won all their home games. Now that’s obviously scary!

Uganda’s football bosses and fans alike are guilty of overselling the quality of their national team players – both are quick to ridicule when things go wrong and are even quicker to talk up their team’s chances if things go right.

Fact of the matter is, Uganda will remain down in the dumps for too long but what is obvious is she will not be at next year’s AFCON.