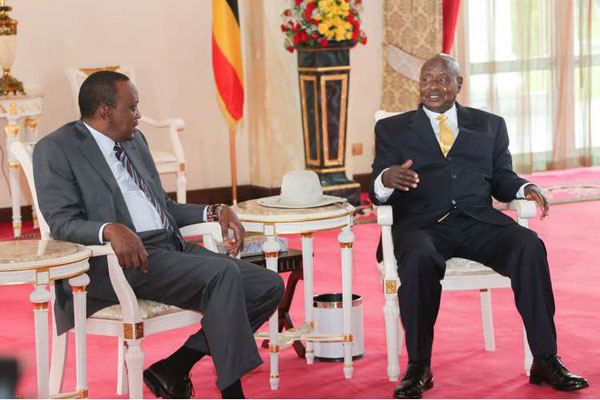 President Museveni’s recent discussions with his Kenyan counterpart Uhuru Kenyatta over having Uganda’s $4 billion crude oil pipeline through there could be watered down.

The financiers Total E&P Uganda has affirmed its commitment to construct but through Tanzania according to DailyNation.

UK Tullow Oil’s has Total as their biggest partner in the Ugandan oil fields as the main financier of the operations and their company’s general manager Adewale Fayemi said at the two-day East Africa Oil and Gas conference in Tanzania.

The firms are eyeing production of an estimated 6.5 billion barrels of Uganda’s crude oil by 2018.

The routes that could be explored by Kenya and Uganda in construction of the crude oil pipeline are; the southern route through Nairobi from Uganda to Mombasa and the northern one through Hoima, Lokichar Lamu.

Before holding talks with Kenyata, President Museveni and Tanzania’s John Pombe Magufuli had agreed on the other hand, that they could construct the pipeline from the Albertine basin in western Uganda to the port of Tanga.

President Museveni according to sources ordered to have all possible Tanzanian and Kenyan routes reviewed and harmonised.

Tanzanians through their Petroleum Development Corporation (TPDC) have already begged France for $4 billion to begin construction of the pipeline by August and have it completed in two years while Kenya is open to any least cost route available including taking the matters to East African Community tribunals, “whatever the case, we will go it together as East Africans,”  Mr Daniel Kiptoo, the legal adviser of the Kenyatta Cabinet secretary for Energy and Petroleum told Total.