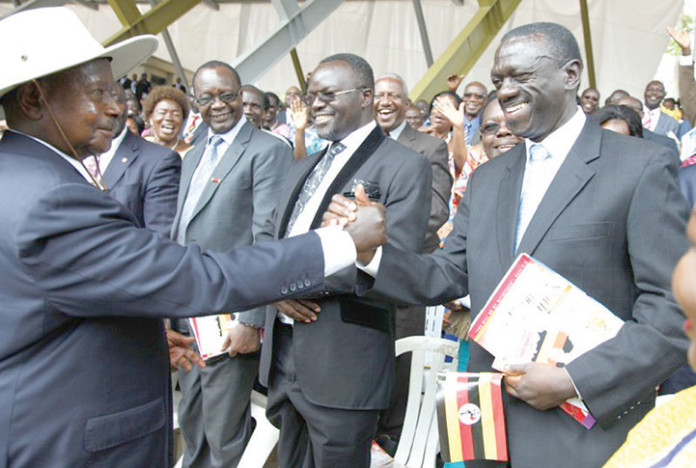 President Yoweri Museveni and Dr Warren Kizza Besigye, his main challenger in the February presidential elections, have agreed to a power-sharing deal.

According to impeccable foreign affairs sources, the Museveni-Besigye deal was arrived at after talks brokered by shuttle diplomat Ambassador Johnnie Carson, who was assigned by US President Barack Obama to ensure that the two Ugandan leaders agree to the deal in a bid to enhance stability.

Johnnie Carson is a long-serving US diplomat who served as Ambassador to Uganda between 1991 and 1994, and also served as US Assistant Secretary of State for African Affairs during President Obama’s first term between 2009 and 2013.

Another person who has been key in the talks is the Oxfam International Executive Director Winnie Byanyima is also Besigye’s wife.

According to sources, before, Amb. Carson came in; efforts had been initiated by the American Embassy in Kampala to soften the ground before Carson’s arrival. EagleOnline understands that a meeting is scheduled take place in Kenya preferred in Mombasa where both teams will lead selected committees of their delegations to observe the signing of the Memorandum of Understanding that will calumniate into power sharing government before swearing in May.

Mbale Municipality Member of Parliament and lead advisor to Forum for Democratic Change (FDC) party on foreign affairs; Amb Jack Wamai Wamanga confirmed this development but advised that the country will be notified when everything is conclusive.

“It is true, we are engaging in a discussion that will further democracy in our country and this is done by our friends but again, we shouldn’t rush to conclude that we have given to the NRM but yet again, let us wait, we will tell the country when everything is conclusive” Amb. Wamai said.

Foreign Affairs Permanent Secretary, Amb. James Mugume remained tight lipped but said there is nothing wrong with both Besigye and Museveni talking.

“Whatever you are talking about is new to me but why would it be surprising for the two leaders to engage in a meaningful discussion for the betterment of the country?”

Kadaga calls for census of Persons with Albinism in Uganda