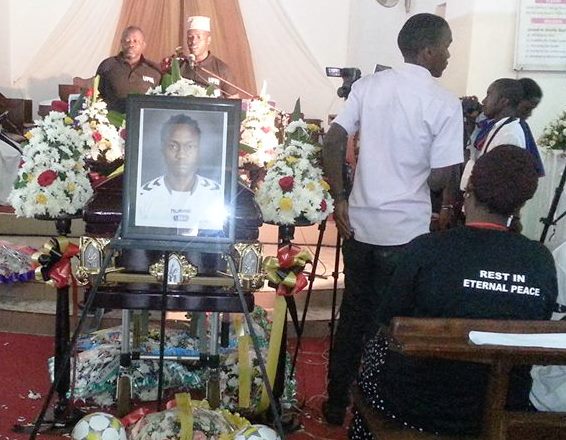 Despondently his family and the local football body officials fought over money State House had put up to assist in returning the body from Iceland, where he played for IBV Vestmannaeyjar, for burial.

A source close to the bereaved family said as the late Dhaira was getting the worthy praise, his cousin Mayembe Faisal and officials from Fufa were squaring over who should be responsible for over $8000 meant to transport the body from Kampala to Jinja at the late Dhaira’s home just a mere 86kms west.

Their initial $54000 budget was rejected by State House as exaggerated and instead, President Museveni gave them shs30m off which shs12m was given directly to Fufa to handle funeral arrangements back home.

However, drama started when Dhaira’s father, Bright Dhaira wanted to handle the funeral and burial activities of his beloved son himself but Fufa resisted. On the day of picking the money from State House, both Dhaira’s family and Fufa officials reached Entebbe at the same time and immediately started arguing before President Museveni’s staff on especially whether the shs12m that Fufa had received from government earlier on to be paid to the funeral home that was to receive the body at Entebbe International airport.

“Fufa was claiming they already paid A-Plus funeral home Shs12m yet Mr. Dhaira wanted his preferred Uganda Kampala Funeral Services to do thejob. I actually asked those Fufa people if they found it fine to start fighting with the boy’s father over who should bury him and how,” the source revealed to EagleOnline.

As the ping-pong continued, Dhaira’s father cut off communication with Fufa saying he doesn’t want them to run the burial of his son.

“He was unhappy because when his son was in Nsambya Hospital last year, no one from Fufa ever went to check on him or even make a phone call save for former Cranes captain Andy Mwesigwa who has looked out for Dhaira since he was still finding his mark at Express FC. Dhaira Snr. thought they were only pretending to care,” the source added.

However, it has also been exposed that Iceland authorities had notified panicky Uganda officials that they were not releasing the body if there was no person, let alone a funeral home registered as having accepted to receive it in Uganda.

To solve that glitch as the disagreement over money went on, Internal Affairs spokesperson Pamela Ankunda, who was helping the family secure the money from State House was selected as the recipient of the body, with Kampala Funeral Services as the local funeral home.

Probably to avoid shame, Fufa at last relented and released the Shs12M that they had pocketed to the grieving father and allowed him to use a funeral home of his choice. They also added him Shs5M as the federation’s contribution toward the burial arrangements.

The fallen goalkeeper’s sister Olivia Dhaira narrated to a sombre congregation at All Saints Cathedral in Nakasero about how her brother lived his last moments:  “He was in so much pain and prayed to God: ‘let me rest.’ moments later, he died.”

“Abel was a strong man but due to too much pain, he reached a point and preferred to rest. When they proposed to cremate Dhaira, we were sad,” she added. “We wanted to bury our brother and not ashes. Thanks go out to all Ugandans for the love and support you have showed us during this trying period.

Minister of state for Sports Hon. Charles Bakabulindi represented the Government and appreciated the generosity of President Yoweri Kaguta Museveni towards all the assistance to transport the body of Dhaira from Iceland where he died back to Uganda for a decent burial.

“Dhaira all I can say is, gone too soon. God’s judgment is final and no one can avoid it.” To Uganda Cranes, in honour of our fallen brother Dhaira, can we make him proud by qualifying for the AFCON 2017?” Kampala Lord Mayor Erias Lukwago said.

From All Saints Church, Abel’s body was taken to Nakivubo Stadium, home to Ugandan football, for public viewing. Hundreds braved the rain to take a last look at their fallen star.

It then headed to Jinja, where it, again, was taken for public viewing at Jinja Senior Secondary School, his alma mater for viewing by his high school colleagues and current students.

Dhaira’s family also offered land, in Walukuba, Jinja district to anyone who would wish to set up a cancer institute in honor of his name.

Dhaira will be laid to rest on Wednesday in Mayuge district in Eastern Uganda.

He made his debut for the national team in 2009 and helped the Cranes win the regional Council for East and Central African Football Associations (Cecafa) Senior Challenge Cup in 2012 on home soil.

As well as playing in Iceland his club career included stints with Uganda sides Express and URA before moving to play DR Congo’s AS Vita and later Tanzania’s Simba.