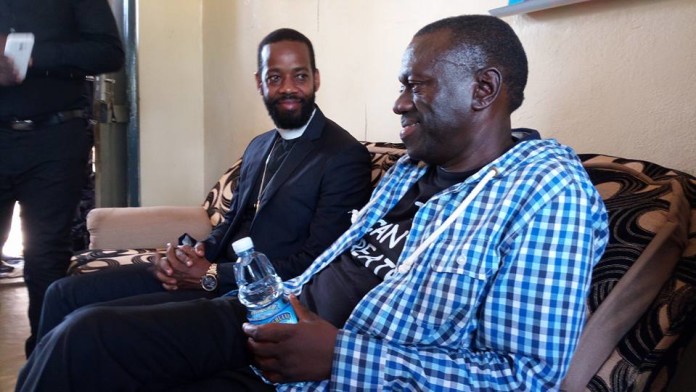 Pastor Ngabo who leads the opposition party’s routine party prayers at Najjanankumbi, Kampala stormed Nagalama police station in Mukono outside the city armed with bibles which sent cops in frenzy.

The youthful preacher likened himself to Nelson Mandela and Martin Luther King Jr. He was in the company of FDC party president Maj Gen Mugisha Muntu, SG Hon. Nathan Nandala-Mafabi, Leader of the Opposition Wafula Oguttu, Ingrid Turinawe, Doreen Nyanjura, Mwijukye Francis, Susan Norma, and many other Activists calling themselves the rescue squad.

The spokesperson for the police, says Mr Besigye had disobeyed orders not to drive through the centre of the city after thousands mobbed his car.

Mr Besigye had been given permission to go to a prayer meeting at his party’s headquarters as long as he did not disrupt business in Kampala.

He has only just been released from house arrest, and this was to be his first trip into the city.

As he was travelling to the party HQ, supporters surrounded his car and tried to follow him to the city centre.

The police then blocked his vehicle, towed it away and first detained him at Kiira Road police station before taking him to Mukono.