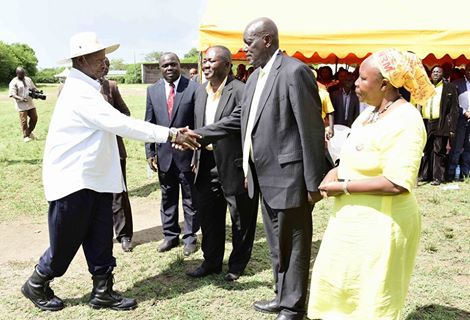 President Yoweri Museveni has called on the leaders of Kasese district to take the message of peace to the people and the region and to advise them to ignore anybody giving them negative and false hopes of the creation of the so-called Yiira Republic.

He said that it is not only impossible to annex any part of Uganda but it is also false and not practical.

“I want to state categorically, that Uganda will not lose even a piece of her land to the creation of the so-called Yiira republic and whoever wants that republic should create it outside Uganda’s territory. Even Besigye who promised it, if he became President and made that mistake, he would not sleep in State House that day. This country has some people who fought for it to be what it is and no one should even dream about taking part of its territory to form a new republic,” he emphasized.

President Museveni said that it was false for anyone behind the creation of the so-called Yiira republic to base it on the allegation that their people are marginalized, especially in Uganda. He added that NRM has a track record of fighting for the rights of the weak, the minority and for self-determination of humanity, adding that based on that, the Movement government couldn’t have left any Ugandan under any form of suppression.

“We know how to fight for the oppressed and marginalized in society. We have done it and we have some certificates of recognition on that as opposed to those who pretend to fight for the marginalized. We fought apartheid in South Africa, Arab chauvinism in South Sudan and, locally, sectarianism in the recruitment into the armed forces and so, we can’t fail to stand with any marginalized group especially in Uganda,” he added.

The President urged the people of the Rwenzori Region to ignore the false prophets who are propagating the creation of the so-called Yiira Republic that they say would be curved out of the Ugandan territory. He noted that those hatching such an idea are lost people, daydreamers, enemies of peace who don’t love the Rwenzori Region and Uganda as a whole.

Museveni who is currently on a 4-day working visit to the Rwenzori Region to assess the security situation there made the remarks yesterday while meeting Kasese district National Resistance Movement leaders at Mweya Safari Lodge in Kasese district. Rwenzori Region comprises the districts of Kasese, Bundibugyo, Kabarole, Kyenjojo, Kamwenge, Ntoroko and Kyegegwa.

President Museveni expressed disappointment that at this stage of development, some Ugandans with the help of their leaders, instead of identifying their interests and working towards achieving them, are busy preoccupying citizens with trivialities such as one’s identity, tribal or cultural and creation of new countries based on simple tribal identities.

He stressed that the leaders in the Rwenzori region have failed to identify their people’s interests that entail socio-economic challenges especially poverty so that they are able to find solutions to those challenges. He noted that the failure by the leaders to help their people in tackling those socio-economic challenges has overtime degenerated into a social crisis. He said that leaders have gone out of their way and politicized the matter instead of tackling this challenge, thereby worsening the situation.

“You failed to handle your people’s interests and politicized them and continued with identity of tribes but this can’t generate lasting solutions for your people. This is because different tribes have lived together in this region for centuries but the crisis today is because of the new socio-economic demands which are here and are unanswered,” he said.

President Museveni appealed to the people of Kasese district to embrace peace and shun those drumming for war. He noted that Uganda was set for development and peace is fundamental for this phase.

“We are set for development with focus on industrialization, modern agriculture, promotion of tourism and the service sector to generate employment for the youth. Please, follow the God’s prayer and do not lead us into temptation by leading us to war at this crucial stage,” he warned.

The President assured the people of Kasese district that the Uganda People’s Defence Forces (UPDF) is stronger than ever before and has increased its presence in the Rwenzori region to guarantee peace and security.

On the reported militias that have been formed by some negative forces in the Rwenzori Region, the President assured the people of the area that his government is well experienced in dealing with militias. He gave assurances that militias can’t be a problem to Uganda when he is in leadership.

“We dealt with Lakwena who had 50,000 militias, most of them armed, and the Karimojong who had 40,000 riffles. These are our children who are being abused by selfish people. We shall get in touch with them and get them out of their hiding peacefully. Unfortunately some of them have already lost their lives in this circus due to false prophets,” he said.

President Museveni emphasized that traditional and cultural leaders should not be dragged into partisan politics adding that anyone doing that was their enemy and the enemy of their institutions.