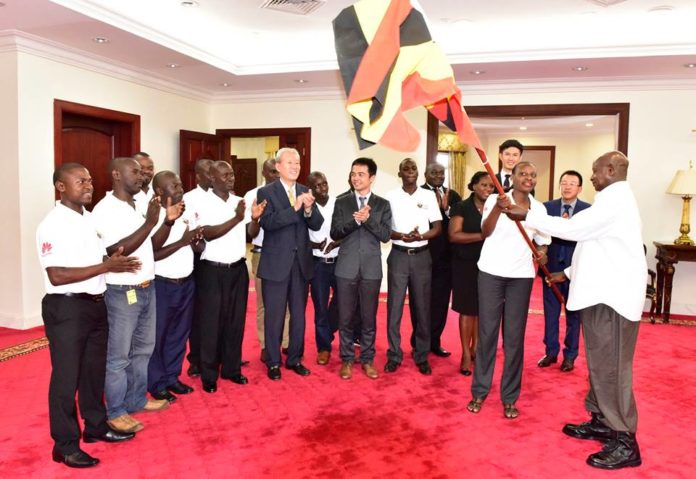 President Yoweri Museveni has today flagged off ten Ugandan ICT professionals to take part in the Huawei Seeds for the Future training program in Shenzhen, China.

“It is my pleasure to flag off these people to go and study computer Science in China” President Museveni said at a ceremony held at Statehouse Entebbe. The team leaves this weekend. The President later signed an autograph on one of the Huawei T-Shirts.

The training program is set to start from 16th to 30th April 2016 at the Huawei headquarters in Shenzhen China. It is expected to equip the Ugandans with knowledge in areas of telecom strategy, ICT industry trends and newest technology and equipment.

The program was announced by Huawei during President Museveni’s state visit to China in 2015 and it is expected to see 10 young people from Uganda acquire knowledge in the latest technology in Huawei training centers around the world every year, according to the Huawei Managing Director Mr. Stanley Chyn at the flag  off ceremony.

“Your Excellency, we intend to take 10 trainees every year to our training centers in China and we know they shall benefit from this program in terms of ICT knowledge transfer”, he said.

The program that started globally in 2008 was launched to nurture professionals who are urgently needed to drive development of the ICT industry in countries where Huawei operates.

According to Mr. Stanley Chyn, this kind of training will be done annually with the aim of imparting new ICT technologies and skills to young Ugandans.
The program is sponsored by Huawei Technologies limited company in agreement with the Ugandan government.
The Ambassador of China to Uganda, H.E. Zhao Yali, attended the ceremony.