This could be the most disappointing statement ever given by a Ugandan minister and more still a Member of Parliament.

The Speaker of Parliament Rebecca Kadaga and her almost 400 MPs on Thursday afternoon filled up the house in anticipation of optimism about the breakdown of the radiotherapy machine as State Minister for Health, Kinkizi East MP Chris Baryomunsi addressed them.

The issue was raised on the floor of parliament by Bufumbira East MP Mr. Eddie Kwizera today at 3:30pm. He raised the concern of the breakdown of the radiotherapy machine as a matter of national importance.

But were massively disappointed after he said cancer patients are going to die anyway even if the machine hadn’t broken down and some selected survivors ‘were to be exported’ to Kenya.

But it obviously wasn’t time for the honorable minister to say goodbye.

“Matter of radiotherapy machine breakdown has been exaggerated by social media, there is no need for alarm,” he added.

“Government has an offer from the Aga-Khan hospital Nairobi to treat up to 400 patients, and we will foot the bill and more still will provide for transport plus upkeep the chosen patients to get radiotherapy in Kenya.

The mode of selection of those to be taken to Aga-Khan hospital is yet to be explained though.

Mulago is the only hospital in East Africa that offers radiotherapy free of charge. The International Atomic Energy Agency (IAEA) donated the machine to Uganda’s biggest hospital in 1995. 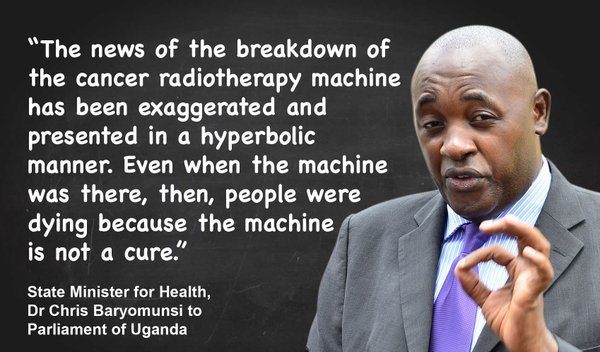 Woman MP Serere District, Hon Alice Alaso asked the Health Minister if there would be any plans of compensation for the families of cancer victims who have died due to lack of access to radiotherapy.

“Over the weekend we buried a priest in Serere who passed away due to no access to the regular radiotherapy he was receiving.” said Hon Alaso.

Minister Baryomunsi dodged that inquiry as expected by many.