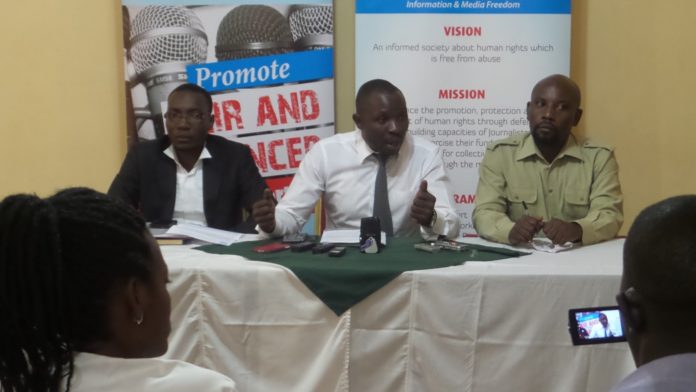 On 10th April 2016, the premises of Human Rights Network for Journalists-Uganda (HRNJ-Uganda) HRNJ-Uganda were broken into by unknown assailants. The break in started at about 4:00am, when a youthful lady approached the security guard on duty and requested him to open to which he complied. Upon querying her, he then offered her a seat just by the guard’s booth. They seemed to converse and later, she stepped out of the compound, only to return with some food and shared it with the guard. Moments after consuming the food, the guard blacked out.

There after some two (2) able bodied young men were shown jump over the fence and approached the guard’s booth where he could have been lying unconscious. These two (2) young men then used the keys they picked from the guard’s booth to open for other two (2) men that came in through the gate carrying metallic equipment.  Then four (4) men are shown moving around the building touching different doors and windows. They left the premises without breaking into the office due to the strong security measures that HRNJ-Uganda has re-enforced like installing cameras, installing another access door at the back, an alarm system and replacing the old burglar proofing and enhanced lighting system around the office .

When staff reported to office on Monday morning, they found the night guard unconscious in his booth and called the security firm -Detail Protection Services to come over and take him to hospital which they did. It came off as a normal sickness, so was taken to Mulago hospital. The day went on normally, but in the evening of April 11, 2016, the guard on duty wanted to close up the main gate but could not locate the padlocks which prompted him to contact at the staff still at office. They traced for the padlocks but to no avail which prompted a review of the cameras that previewed the entire events of the previous night.

We have since reported the matter to Old Kampala Police Station and hope that full investigations into this intrusion will be undertaken. A police detective and scene of crime officer have since visited the offices.

This trend of office break-in has been going on for a while with human rights organisations targeted in the country. HRNJ-Uganda was last broken into on the night of 29th June 2015 with the robbers making away with computers, valuable documents, money safe and other property worth 45 million shillings.; it was also broken into in May 2013 while still at its old premises at Mengo, forcing it to shift to its current premises. Both cases were reported to police but no reports have since been made.

This notwithstanding, HRNJ-Uganda is in a sound position and dully carrying on with delivering on its mandate of defending and promoting media freedoms and journalists’ rights.