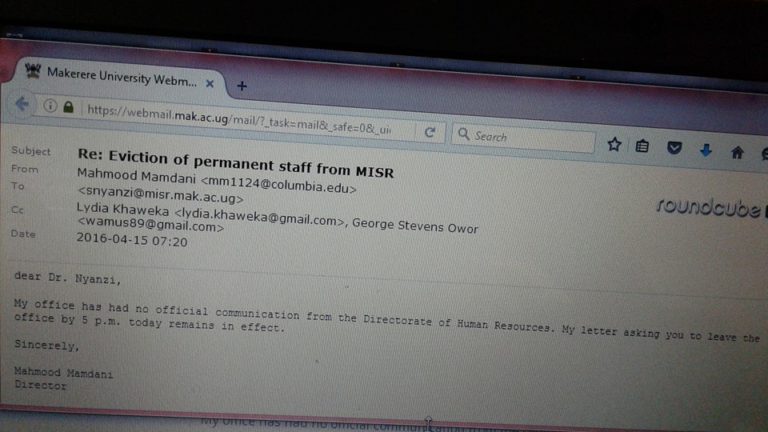 Dr Stella Nyanzi’s disapproval of Prof Mahmood Mamdani’s administration methods has been on from almost the day the former University of Columbia professor joined the Makerere University Institute of Social research.

A treasure trove of emails that the Eagle Online plucked from sources at the Institute show that by 2012, the gifted with words academic researcher was sharing her strong views about Prof Mamdani with colleagues at the institute.

In one of the emails reference: ‘Bidding farewell to MISR’s departing staff,’ Dr Nyanzi gives details of a fair well party that was organized to honour departing staff at the Institute.

She writes in the emails that the sumptuous meals and good music at the farewell parties notwithstanding, the institute is dogged with poor management by Prof Mamdani whom she refers to as the manager and accuses of personalising and centralising all management functions in to one person with “fervent support of very sweet but junior poodle.”

She argued that the manager (Mamdani) killed all the aspects of group decision making and watered the seeds of lack of institutionalized systems of accountability, transparency or checks and balances.

She added: “The manager dances alone at MISR. All the management functions sit in his belly, and come out through his mouth for many feet to implement. It all became a frightening one-man show with the occasional accomplice of one American academic, and the effective implementation of high-heeled supporters too awed to resist, challenge or contest a thing.”

A source familiar with the issues at MISR says the biggest problem with the renowned professor is ego. “My only issue with Mamdani is that he says he is committed to African research by Africans but I think isolating MISR as a fiefdom where he determines alone what this means. He seems to have been eased out of his turf in the US and in response he has decided to set up shop in Makerere and make MISR his empire to strike back,” the source said.

The same source also points to an incident where Prof. Mamdani scrapped an academic project and moved to expensively renovate the floor that housed the project and just as his colleagues at the institute thought he was to replace it with another academic related program, he rented it out, cheaply to his wife’s film project.

Dr. Nyanzi also referred to the film project in one her Facebook rants.

In another of her emails, tittled ‘Flowers, Sweets, Ideas and the Phallic Recorder: Simple beauties at MISR,’ Dr. Nyanzi talks at length about how in Prof. Mamdani’s administration pays much attention to providing sweets, decorations and an assortment of delicacies during academic lectures than recording the proceeding for future use by students and researchers.

“By God, the bouquets that grace the workshops at MISR are beautiful…”the email starts. “When MISR hosted His Excellency Thabo Mbeki, there were as many as five bouquets of flowers present during our MISR workshop. The effect of dense scholarship set in the context of the beauty of flowers eludes explanation with words.”

Then after close to 800 words, she clearly made her point about the failure to record and document academic lectures held at the institute.

“If we can access the products recorded using the phallic recorder, what is the process for actualizing this access? Are copies kept as reference or borrowable materials in the library?

“It would have been great to have a recording of Prof. Partha Chaterjee’s inaugural lecture… Anyway, my handwritten notes are safely tucked away in my spiral-bound notebook – another of the beautiful simplicities availed to participants in the MISR academic spaces,” she wrote.

It is hard to point to how this Mamdani-Nyanzi seesaw will end. However many who have found it difficult to work with the Prof Mamdani have in the past chosen to jump ship. One of them is Dr Frederick Kisekka-Ntale who has since joined private research practice.

Another, Adam Branch, a true Mamdani convert who stood by Mamdani when this storm was brewing, eventually left.

Dr Nyanzi was asked to vacate office after she refused to teach on a Ph.D. program at the institute. Subsequently, she was asked to give her office to those who will be teaching and participating on the program.

She thinks that is wrong, and in of her posts of Facebook, she describes Prof Mamdani cheap and a Machiavellian man with meaningless weight who likes to show off that he is full charge of his erection by bulldozing people and attempting to, through evicting her, pay back for Amin’s expulsion of Indians in the 1972.