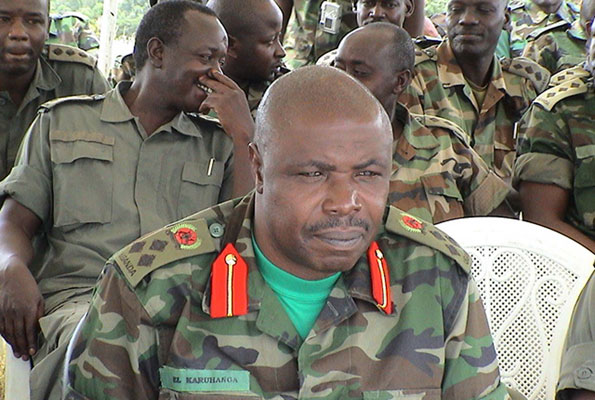 Maj. Gen. Levy Karuhanga, the chairman of Makindye based Court Marital is dead.

Karuhanga was rushed to Nakasero hospital with stomach complication and he has since been in critical condition. By the time of his death, he was trying Gen. Sejusa.

He was born in Bushenyi District in the Western Region of Uganda on 24 February 1956. He studied at Nyamitoma, Bweranyangi, and Mwengura Primary Schools. He then joined Mbarara High School, from where he moved to Nairobi, Kenya, where he graduated with a diploma in international studies.

He joined the Ugandan Bush War around 1981 in Luweero District. His recruitment number is RO/057, the 57th recruit of the then new rebel force. He fought throughout the war until the National Resistance Army captured power in 1986. Over the past 25 years, he has undergone military training including the following courses:

Karuhanga has served in a number of assignments in the UPDF, including in the following positions.  Brigade commander in the UPDF 4th Division, between 1990 and 1992. Member of the UPDF Contingent and second in command of United Nations forces in Liberia, in 1994. Deputy Commander of the 3rd UPDF Division, in 1998. 3rd Division commanding officer in 2001. First Division commanding officer from 2005 until 2007. In 2007, Karuhanga was appointed as the first commander of the African Union Mission to Somalia (AMISOM), serving in that capacity until 2008. In 2010, he was appointed commanding officer of the UPDF Reserve Force, serving there until June 2014, when he was given his current assignment.[6]