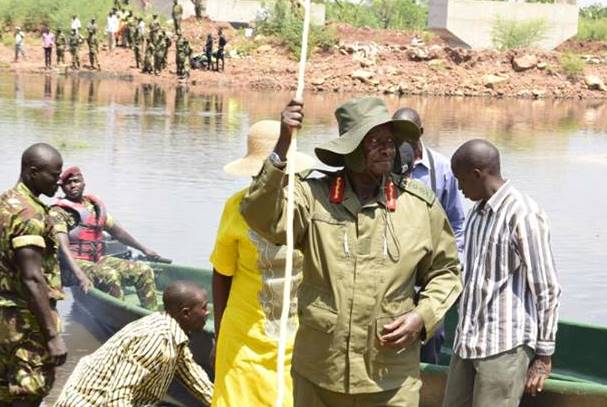 President Yoweri Museveni has Friday left the country for Laikipia, Kenya for a summit to boost awareness on the threat of poaching.

Mr Museveni will join Kenyan President Uhuru Kenyatta, who is to convene the inaugural ‘Giants Club’ summit to tackle the elephant and rhino poaching crisis.

The summit of African Heads of State, corporate leaders, philanthropists and conservation experts are expected to develop a continent-wide response to the trade in illegal-wildlife.

The two-day event is being staged in partnership with the Kenya-based wildlife charity ‘Space for Giants’.

The bonfire will be the largest-ever torching of ivory, involving 105 tonnes from thousands of dead elephants, dwarfing by seven times any stockpile burned before.

A State House official told EagleOnline that President Museveni’s heading to Kenya for the summit shows  how much Uganda is committed to the cause of raising global awareness and eventually achieving a total ban on ivory trade, while highlighting the multiple methods used in the fight against poachers, from the frontline, where rangers are out on patrol, to the court room.

Aerial surveys of elephant populations in Uganda’s national parks have shown their numbers are increasing, according to Wildlife Conservation Society (WCS) and Uganda Wildlife Authority(UWA).

While most elephant populations are declining across Africa these results show how a commitment to supporting effective protection of elephants can lead to their recovery.

Uganda’s elephant numbers plummeted in the 1970s and 1980s because of widespread poaching and limited resources for the then Uganda National Parks. Elephants became confined to protected areas due to poaching pressures and numbers dropped as low as 700-800 individuals in the country.

With improved protection since the 1990s and the creation of UWA, together with support from Government, donors, and conservation partners, elephant numbers have now increased to over 5,000.

Elephant numbers in Queen Elizabeth Park have reached levels similar to those in the 1960s before heavy poaching hit the Park. There is a continued population recovery in Murchison, a former elephant stronghold, and UWA’s protection efforts are yielding positive results for many wildlife species in Kidepo Valley and Karenga.