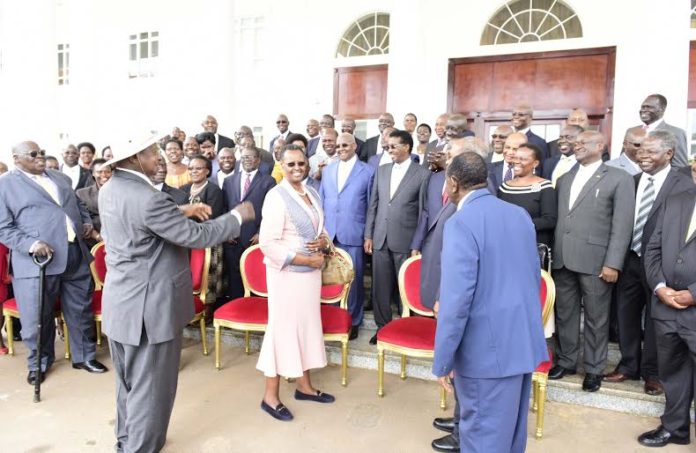 Today, Wednesday 4th May 2016 was the last day of business as President Yoweri Museveni held a special luncheon for the outgoing Cabinet describing it as ‘tremendous’ and one, which almost took Uganda to a middle income status.

Museveni who hosted the ministers to a luncheon shortly after chairing the cabinet meeting at State House Entebbe, using proverbs and powerful anecdotes congratulated the outgoing cabinet for pushing Uganda to its present status. 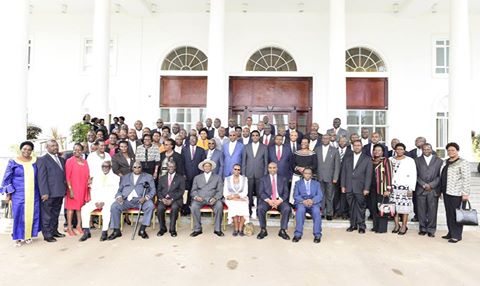 The Banyankole have a proverb, “Owa yekuba ekikungu a shana na kyo,” (When you sit near the red anthill, you will also get the colour of the anthill), the President said, emphasizing that when the NRM came from the bush, they preached the philosophy of unity and oneness. “You don’t think about religion you don’t think about tribes,” he said.

He drew on another example of unity in diversity of a religious kinyankole song Ruhanga Isiitwe (God our father) which is sang by all various religious denominations including Catholics and Protestants. He said the Catholics of Bukalango in Wakiso who prayed for him shortly before he kicked off the just concluded campaign season also sang the same song.

Using another proverb to drive his point home, the President said despite the challenges, Uganda has progressed tremendously.

“Omugwerera akatweka enyanja ati ano bwoba atahire abaraguruka. (A mad man set fire to the wet grass near the lake but it did not burn properly and he said even if you have all not burnt, at least you have felt the fire),” he said, describing Uganda problems as many and that even if not all of them have been fully resolved, many have felt the pressure of NRM.

President Museveni said that when the National Resistance Movement (NRM) came into power Uganda had so many problems but majority have since then been resolved. He added that the next term will be much easier, as Uganda will have started exploring its oil.

“We have finished the issue of the pipeline and are going to start exploring our oil. By 2019, we shall start earning money from the oil,” he said.

The President said that this is the Cabinet that has taken Uganda to near middle income status.

The President who is due to be sworn in on May 12, 2016 said his cabinet also faced some institutional challenges.

“There were some institutional ones which will be remembered especially internal treachery. One individual worked within us and wanted to divide us. Am not wrong to say that at least 99.99% of Cabinet stuck together. This Cabinet was steadfast. Where we are going is much easier, we are about to export our oil and by 2019 we shall be getting our oil money. Things that we did by borrowing like infrastructure will be done more easily with our own money,” he said.

The President described the outgoing cabinet as a tremendous cabinet and that with their experience, they know where things went wrong and right and it will be easier to move forward.

“This will go on the records of Uganda that this cabinet, this government was steadfast. Where we are going is becoming easier. They played a historical role of discovering oil in 2006, struggled to bring the oil out of the ground and now we are at the threshold. Will use their experience to go forward,” he said.

The Vice President Edward Kiwanuka Ssekandi thanked the President and the First Lady for hosting them to the luncheon as they prepared for the next big ceremony of swearing in the President elect.

“We pledge to support you to continue with the great work and success that you have scored and we shall be with you more,” he said.

The Prime Minister Dr. Ruhakana Rugunda described the last five years as rather challenging but pledged to continue with the struggle.

“In spite of the challenges here and there, the team has been cohesive, steadfast and has moved on. He said the out going Cabinet has moved Uganda very close to being a middle-income country.