Embattled South African President Jacob Gedleyihlekisa Zumba has confirmed his presence at the fifth term swearing- in of President Yoweri Museveni scheduled for May 12, 2016.

Zuma who recently survived an impeachment vote over breaching the constitution has marked the date on his officially website: ‘thepresidency.gov.za’ 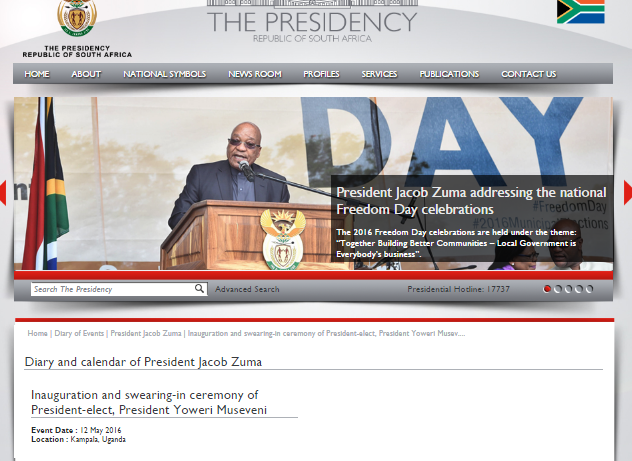 According to Ministry of Foreign Affairs Permanent Secretary Ambassador James Mugume, Uganda sent invitations to all heads of states within the African Union (AU) among others to demonstrate African solidarity.

America president Barack Obama, United Kingdom Prime Minister David Cameron among others. It is not clear if the both have accepted the invitations.

Drama ensured in May 2011, Uganda police had to shoot at a crowd after it attacked a car carrying Nigeria’s President Goodluck Jonathan who had attended President Museveni’s inauguration ceremony.

The Uganda Peoples Defence Airforce (UPDAF) has for the last two days being carrying “routine” drilling of pilots with country’s Russian jet fighters in a radius above the Kololo Airstrip in Kampala where the ceremony will take place.