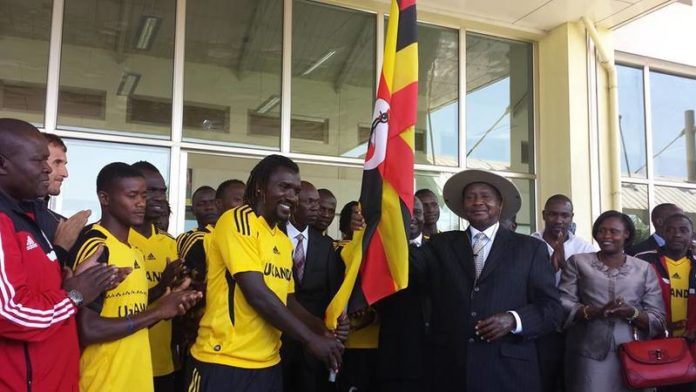 On the 4th of June this year which is exactly three weeks from now the National team the Cranes will be playing away in Gaborone in a crucial Afcon 2017 qualifier against Botswana.

A win against Bostwana will provide Uganda Cranes with an easy path to Gabon but most importantly will deliver tremendous mileage to President Yoweri Museveni’s government.

However in a rather brutal and cruel turn of events orchestrated by National council of Sports, a decision has been made to bring down the curtain on FUFA by disbanding it. The men behind this uncouth move are; Ministry of education and Sports (Charles Bakabulindi, Jennifer Alupo and Omara Apita), National Council of Sports (Onyik Bosco, Galiwango Zubair, Muramagi), Kavuma Kabenge and Solicitor General’s office (Kyomuhendo).

In their vile calculation, these evil men believe that by disbanding FUFA, then FIFA will have no option but to Ban Uganda from all international and local football activities played under association football.

Technically, this would mean that Uganda Cranes game against Bostwana is then put off and Uganda immediately banned from Afcon 2017.

The FIFA ban would definitely attract widespread criticism of government and consequently put the blame on President Yoweri Museveni. The game plan then would be to alienate the government further from people and plant seeds of widespread discontent among the large football following fraternity.

The architects of this malice and sabotage campaign know to well that Ugandans unite around the national team the Cranes and therefore tearing the national team plans apart will play a big role in bringing shame to Museveni’s government.

Turning this block of football followers against Government is all that matters to them!!

But the ban will not only stop at the Uganda Cranes, it will by extension bring an abrupt end to the Uganda premier league that of late has drawn so much attention with fans on the edges of their seats unsure of which team is likely to win it. Being a KCCA fan this is the ultimate injustice one can suffer at such a time! Just when we thought that the league is in our grasp, NCS and its cohorts are planning for other victory parties of denying us our success. I wonder what these people are smoking!!

One of the motivation factors driven by Charles Bakabulindi and Jennifer Alupo to stab Museveni in the back is that they have failed to get over their obsession with RT Hon Amama Mbabazi. It is not a secret that the duo is great admirers of the Go Forward Founder. This however would not be a problem since everybody is entitled to his choice. What makes this a problem is to use that obsession to negatively undermine the existing establishment. This time round the duo together with NCS officials are determined to go down the drain fighting Museveni at whatever cost.

Tomorrow Tuesday the 10th of May 2016, National Council of sports officials together with Charles Bakabulindi and Kavuma Kabenge will be holding another meeting at Fair way Hotel at 10:00 am to finalize their devil plans of discrediting President Museveni’s government through the FUFA ban.

Kavuma Kabenge as the NCS lawyer has advised them to quickly effect the ban so that in the midst of that mess where there is no authority he can quickly takeover ownership of the league and bring down a pre-mature end to the Azam premier league. He would then have accounted smartly for the 400000 USD given to him by Super sport.

This script is well written out with officials within the Solicitor general’s office as beneficiaries of the 400000 USD having sold their souls out.

FUFA on the other hand has alerted FIFA on the current under hand proceedings and FIFA has asked them for a minute by minute update for appropriate action.

In a bid to get maximum throughput of their daggers inside Museveni’s back, the plotters of the FUFA ban agreed on a plan to pile more misery on a divided population by tapping into the defiance campaign.

In their well scripted plan, it was agreed that the week in which Museveni would be sworn in, would also be the time when FUFA would be banned attracting a FIFA ban in the process. The double coincidence would then take the gloss away from Museveni’s swearing in with the public narrative and jibe shifting to the embarrassment caused by the FIFA Ban on our National team and soccer activities.

The planners in their wisdom believed that sowing additional seeds of discontent in a population that is emotional and highly charged would be the perfect opportunity to undermine Museveni’s government and the objective would have been achieved.

The public would then ask questions as to why their only sport of unity has also been trampled upon by government. Main stream media including electronic, print and social would be awash with all sorts of discussions of what is happening.

This is exactly what Jennifer Alupo, Charles Bakabulindi, Omara Apita, Galiwango Zubair, Onyik Bosco, Muramagi, Kavuma Kabenge and Kyomuhendo have planned to do.

You don’t have to be a genius to comprehend the timing of the FUFA ban!

DISCLAIMER: The contents contained in this article don’t reflect  the position of EagleOnline or its editors.