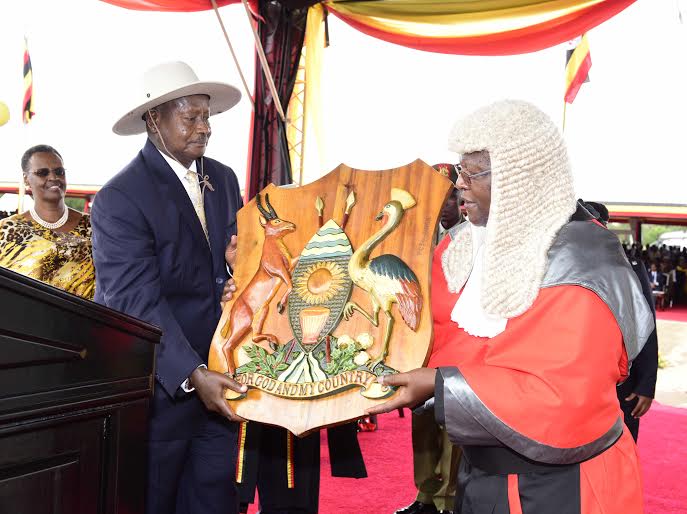 First of all, I welcome Their Excellencies the visiting Heads of State and Members of the visiting delegations. It is a great honour to us for Your Excellencies and the Honourable Members of the visiting delegations to come and be with us on this happy occasion.  Enjoy your stay and, if possible, put aside time to visit the tourist parts of Uganda so that you know more about your country, Uganda, that is exactly mid-way between Alexandria and  Cape Town.  It is exactly five and-a-half hours from here to Alexandria and five and-a-half hours from here to Cape Town by air. 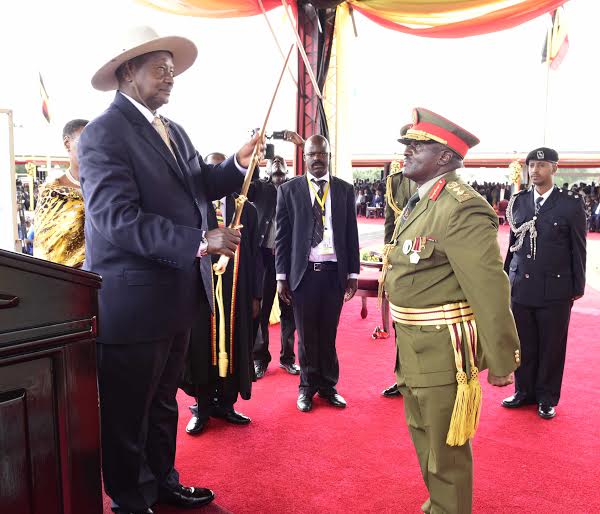 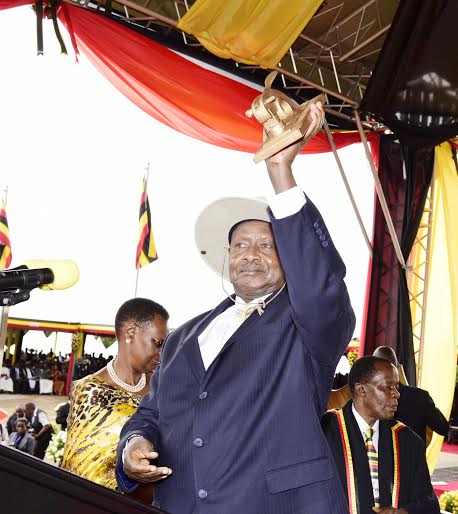 The NRM has been in power for the last 30 years and has brought Uganda from the abyss of insecurity and despair to now the threshold of becoming a middle-income country by 2020.  We would, indeed, have already become a middle-income country if we had more decisively handled the issue of exports.  Since GDP is calculated in dollars, the depreciation of the shilling slows down our march to the middle-income status.  In the coming five years, we are going to aggressively handle this issue.  We shall work hard to export more quantities (and of higher value) of commodities.  Where we export unprocessed raw-materials, we get less value and create less jobs. 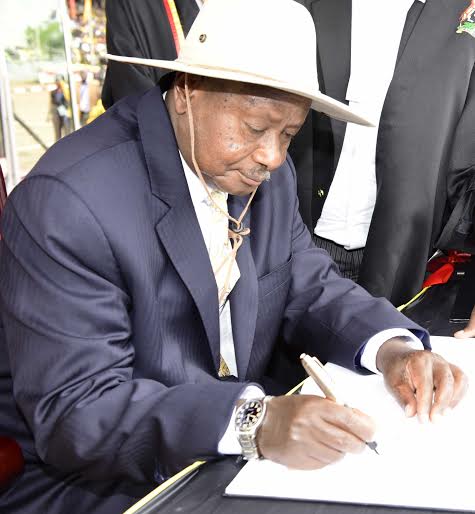 In the past we could not decisively address this aspect because we had a huge deficit of infrastructure (electricity, tarmac roads, ICT, telephones, piped water, etc).  The Ugandans have seen what we have been doing on electricity and the roads.  Right now, we, actually, have a surplus of electricity and we are building more dams as you know.  Our plan is to build more and more dams, not only on all the sites on the Nile River  (Ayago-840MW, Oriang-392MW, Uhuru-400MW, Kiba- 300MW etc.) but also to develop over 40 mini-hydro dams.  Mini hydro-dams already under construction include: Nyagak III 5.4MW, Nyamwamba 9MW, Muvumba 5.4MW, Achwa/Agago 83MW, etc. 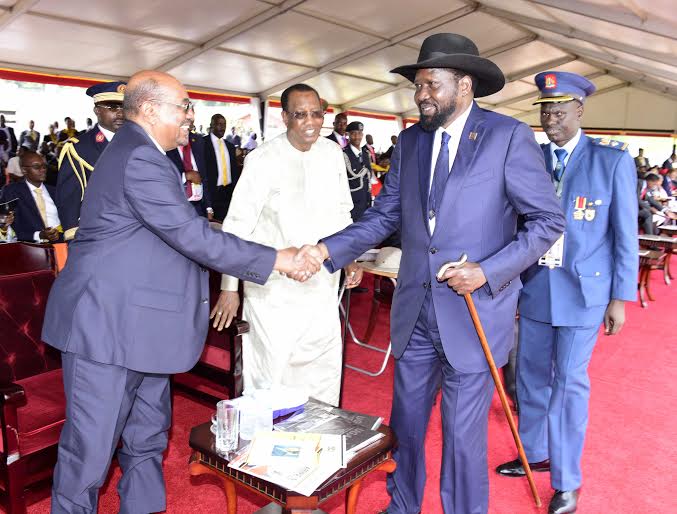 This is apart from electricity from gas, heavy fuel oil (HFO), solar, etc.  In the medium and long-term, we are already preparing for nuclear energy using our vast uranium resources.   That is why I forbade the export on any uranium.

On the side of power, we are now remaining with two challenges ─ the high price of electricity per unit on account of the high cost of money used in building the Bujagali dam and the need to build more transmission wires (lines) so that the electricity gets where it is required.  The expanding and upgrading of the transmission lines is on-going and will continue.  We also have options regarding the bringing down of the cost of Bujagali power.  The other dams do not have that problem.  The power from Nalubaale power station is now at 1.04 US Cents, since the loan for constructing Nalubaale power station has been fully paid back. 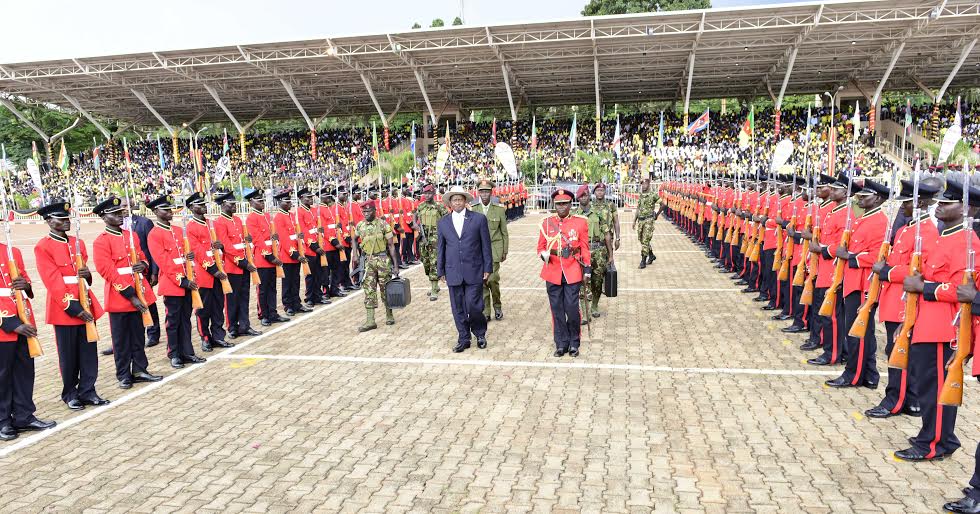 That of Bujagali is at 11 US cents.  The challenge is to bring down the cost of power of Bujagali.

With abundant and cheaper power, our pace of industrialization will pick up. We have already pledged to provide electricity at the cost of 5 American cents per unit to manufacturers, starting with the ones of coffee value addition and textiles.  The others will follow.  More electricity and better network of roads will mean faster industrialization. As projected by the National Planning Authority (NPA), the middle income status will be attained by 2020.

Moreover, as you know, we are working with our relatives in Kenya to modernize the railway by building the Standard Gauge Railway.  This will bring the cost of transport for a 32 metric tonnes container to Mombasa from US dollars 3500 by road, to US dollars 1650 by railway and it will only take one day compared to the present railway which takes 21 days.  It will also save our roads from damage caused by the huge lorries carrying what should be ferried by the train. 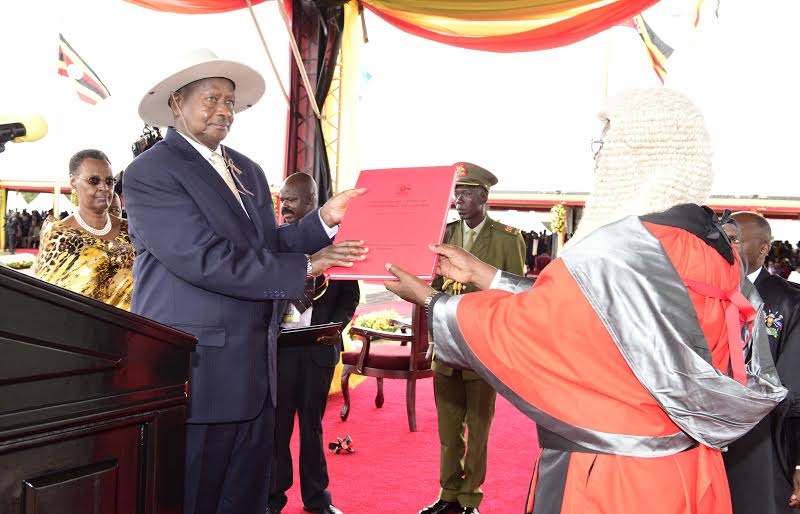 This is all to do with manufacturing.  As I repeatedly tell you, manufacturing is one of the four sectors that comprise our economy.  The other three are:  agriculture, services and ICT.   Peace, electricity and improved road network are stimulating the process of manufacturing.  The same stimuli influence services to some extent.  Agriculture is, of course, linked to industry through agro-processing.

However, the biggest challenge we have in agriculture is cultural and historical.  According to the census of both 2001 and 2014, about 68 per cent of our homesteads are still in subsistence agriculture (only working for food but not working for money).  Only 32 per  cent of the homesteads are in the money economy.  Through Operation Wealth Creation, we are determined to change this.  Coffee, fruit and/or tea seedlings will be given to all the homesteads with land of two acres and above.  Our ideal model, as you know, is four acres.  Two acres, however, can also do something.  In some areas, they grow cocoa.  Each home must have, at least, one acre of food crops (cassava, bananas, Irish potatoes, rice etc).

As far as coffee is concerned, a tissue culture laboratory is going to be built at Kituuza so that we can multiply high quality, disease-free seedlings industrially and quickly.  OWC must stop being everywhere and ending up being nowhere.

They must concentrate on, initially, the three cash-crops ─ coffee, fruits and tea.  As time goes on, we shall get them to distribute chicken, dairy cattle and pigs.  The homesteads with one acre or less, will be helped with poultry for eggs, mushroom growing, onions, pigs and zero-grazing dairy cattle.  Every homestead must be involved in money making.  We cannot accept spectators in this effort.  Maintaining 68% of our homesteads in pre-capitalist modes of production is a wrong form of conservation.  Let us conserve other assets such as wetlands, forests, national parks, etc. but not under development.

The services sector is growing very well spurred on by peace and better roads.  It is growing at the rate of 5.3 per cent  per annum.   Especially for tourism, what is now lacking is publicity.

The Tourism Board will aggressively inform the world about our unique climate as well as flora and fauna.  Services money is easy money for us, especially tourism.

The ICT sector has been facilitated by the building of the ICT backbone and the undersea cables to Kenya and Tanzania.   This has lowered the cost of internet bandwidth from US$1,200 per month to US$ 300 per month and is expected to reduce further to US$150 per month within the next 12 months.  Uganda Investment Authority (UIA) should, therefore, use this new capacity to attract new investors in this sector. 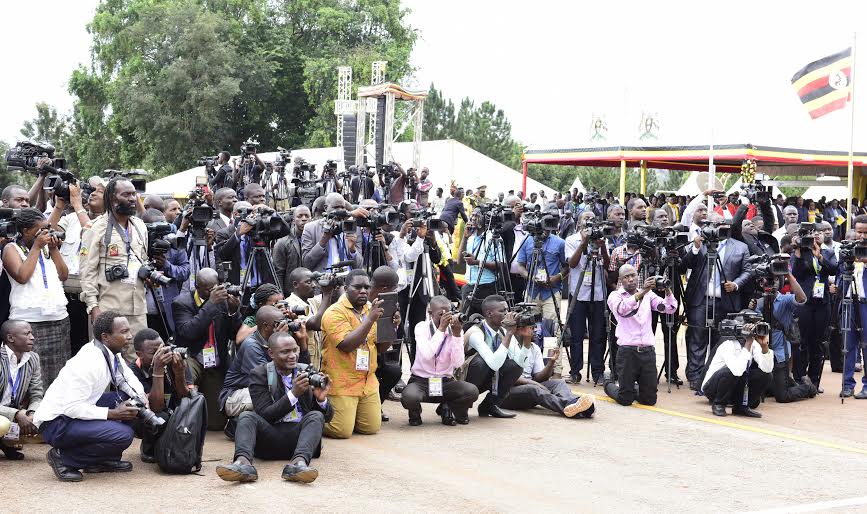 With our brothers and sisters in Africa, through EAC and COMESA, we have already built regional markets for our producers. They can export to the region. We have also negotiated for external markets such as AGOA, EBA, the access to the Chinese and the Indian markets, etc.

All these efforts will translate into more jobs for our youth.  As I said on the occasion of Labour Day, Uganda already has 3,100 factories and 3,475 tourism related companies and assets.

Uganda has been at peace for the first time in 500 years, for many years now.  Uganda will remain at peace.  Nobody has the capacity to disturb this, however hard they might try.

We call upon our African brothers and sisters to work for total peace in Congo, Burundi, Somalia and Central African Republic.  I do not have to speak about West Africa and the Sahel because those are a bit far.  Those nearer know the situation there better than ourselves.

Coming back to the economy, we must expunge two weaknesses ─ corruption by public officials and delay of decision-making.  These two mistakes irritate the public and frustrate the investors.  It is betraying the country.  In this kisanja (term), I will directly deal with the weaknesses.

While in the past I have relied on the accounting officers to do the needful as they are mandated by the constitution, this time I will act directly so as to discipline the Public Service as we disciplined the Army.