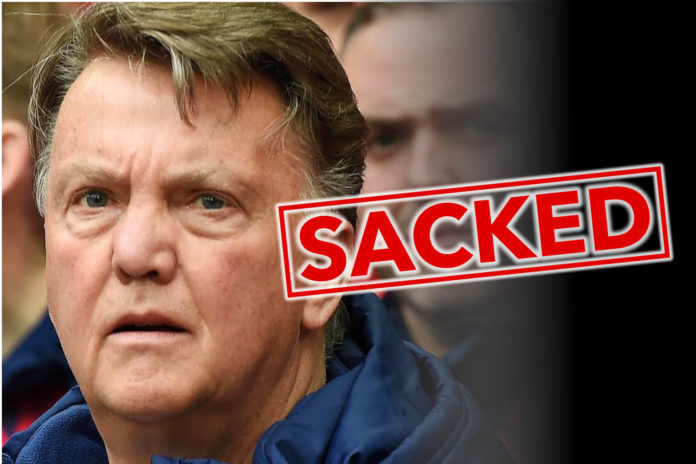 Van Gaal has paid the price for failing to secure Champions League qualification next season with Jose Mourinho set to replace him in charge at Old Trafford.

The 64-year-old Dutchman was given the news at a meeting at United’s Carrington training ground today — less than 48 hours after he led the team to FA Cup glory.

Executive vice-chairman Ed Woodward swung the axe after two years of Van Gaal control, in which time United have struggled to compete for the title.

Woodward met with Van Gaal at Carrington on Monday morning, together with Paul Gilroy – the QC who works on behalf of the League Manager’s Association.

He has had the final year of his contract with the club paid up, worth around £5million, and will now head to retirement after a glittering career in management.

Former Chelsea manager Mourinho is the man who United will appoint now as they desperately try to restablish themselves as the best in the Premier League.

Despite spending almost £250million on players, the club is as far away from challenging for the title as they were under David Moyes and they risked being left behind further if they didn’t act.

In his two years, Van Gaal led United to fourth and then fifth place finishes in the Premier League.

He failed to get out of an easy Champions League group and was then knocked out of the Europa League by Liverpool.

Van Gaal had lost the support of the United squad, with several upset at his training methods and the way he tried to stifle their natural instincts during games.

Supporters had also grown tired of watching the slow, patient tactics the Dutchman preferred and had started to make their feelings known during matches at Old Trafford.

The fans made their views clear even in victory at Wembley booing Van Gaal as he approached the Royal box.

Mourinho has been linked with the United job ever since he left Chelsea late last year, and has been in position to take over since just before Christmas.

Every time it looked as though Van Gaal would be sacked, the United boss somewho inspired a couple of results to keep him in the job — but once it was impossible to finish in the top four his position became untenable.