A Chinese firm has apologised over an advert for detergent which has provoked a storm of allegations of racism.

The manufacturer of Qiaobi said it strongly opposed and condemned racial discrimination, and was sorry the advert had caused controversy.

In it, a black man is stuffed head-first into a washing machine before emerging as a light-skinned Asian.

In its initial response several days ago, the firm had suggested that its critics overseas were too sensitive.

What is behind China’s ‘racist’ whitewashing advert?

And in a statement of apology late on Saturday, Shanghai Leishang Cosmetics Ltd Co also blamed foreign media for amplifying the advert. It first appeared in March but was halted amid protests this week which followed extensive media coverage of the controversy.

“We express our apology for the harm caused to the African people because of the spread of the ad and the over-amplification by the media,” it said. “We sincerely hope the public and the media will not over-read it.”

The company says it has withdrawn links to the advert, and would like others to stop sharing it online.

Within the past few days, it has been watched more than 6.5 million times on YouTube. 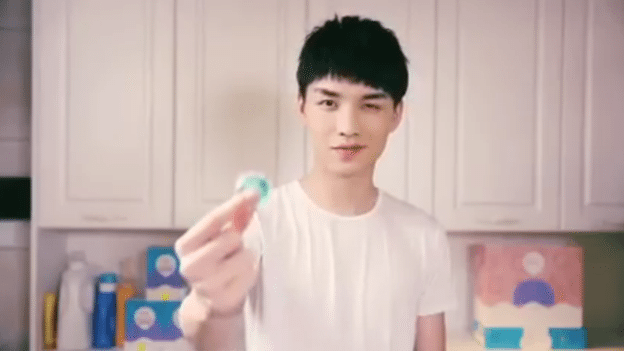 What is in the advert?

The scene: a young Chinese woman is doing her laundry. In walks a black man, with some paint stains on his face. They look at each other suggestively. She puts a tab of detergent into his mouth…