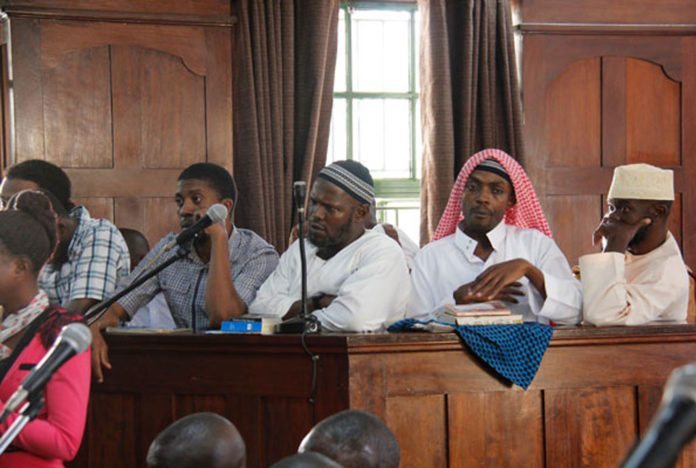 The Chief Magistrates Court in Jinja district has today, Wednesday, June 1, 2016, instituted fresh charges of terrorism and related conspiracy against the five suspects acquitted last week in relation to the 2010 Kampala twin bombings in which 76 lives were lost.

At the time, police said then the men were being held outside the capital for their own safety.

Besides the five who were acquitted, five other suspects convicted of terrorism were given life sentences; two others were given 50 year jail sentences, while and another man was convicted of a lesser accessory charge.

The suspects’ lawyer Caleb Alaka told EagleOnline that the group that was re-arrested moments after regaining their freedom and that their whereabouts are still unknown until today when they were freshly charged in Jinja.

The five had been acquitted on ground that prosecution failed to provide evidence linking them to the bombings but EagleOnline understands that a re-investigation was hurriedly carried out by state prosecutors who aver that hand written documents and related materials asking members to conduct hostile reconnaissance around security facilities and other vital installations, in preparation for violence, were seized and fresh evidence of the new plot that connected the suspects to the materials, recovered.

The new charge sheets states that while at Luzira Upper prisons, the rearrested five allegedly created documents and materials connected with preparations to facilitate, assist or engage co-conspirators to undertake terrorist acts.

It should however be noted that Justice Owiny Dollo had also dropped the charges of belonging to a terrorist organisation brought against the suspects, saying Al Shabaab, which they are linked to, isn’t a designated a terror organisation in the Ugandan law books.

In a related development, Police spokesperson Fred Enanga confirmed the developments and revealed that the force and sister security agencies continue to maintain vigilance to thwart threats of terrorism.

“We encourage the public to always remain alert and report any suspicious activity to the police, other security personnel or local council officials for immediate attention,” Enanga said on Monday evening.