Dr. Stella Nyanzi was on Monday unanimously put up for the sack by Makerere University management after being found guilty of gross misconduct for stripping naked as a protest against the way she had been treated by her boss.

In April, she stripped to her underwear in protest at being evicted from her office at Institute of Social Research by her boss over a contractual dispute. Ms Nyanzi, who was suspended for the investigation, is likely to face further disciplinary action.

Ms Nyanzi, just like Fat Boy is a popular figure on social media in Uganda, especially on Facebook, where she posts commentary on social and political issues in very descriptive language and on Monday decided to use the same platform to give her honest, measured and well-considered response to the Makerere report.

Unsurprisingly, people failed to sympathise with the emotional turmoil of a convicted nudist.

But then James Onen ‘fixed’ her response, where he also accused her of ‘playing the silly feminism/misogyny card’.

He writes: “Good riddance to you, frankly. The truth finally emerged and common sense prevailed at Makerere. I hope you’ve learned your lesson. Next time don’t act like a child. Handle your grievances in a mature manner and if there is no redress simply resign and seek employment in a place better suited to your needs. This is what mature people do in similar situations. I feel sorry for your followers who blindly offered you moral support in response to your total, utter buffoonery. You should be ashamed of yourself. Be a better role model. One need not sacrifice their dignity for a bit of attention and sensationalism.

“And then you play the silly feminism/misogyny card as if this gets you anywhere. Take a holiday, reflect on your actions, and come back a better person if at all that is possible (which frankly, i doubt). This entire episode was pathetic and regrettable. You should be ashamed of yourself. This will be my topic on tomorrow’s show. The complete and utter destruction of an unhinged attention seeker. Behold.

A moving statement read out at Ms Nyanzi’s feelings about the investigation against her conduct, in which she describes her refusal to return to a violently oppressive work-place where she will continue under Mahmood Mamdani’s misogynistic reign of terror, has since gone viral.

Here’s Stella Nynazi’s resignation message in full – with no edits. 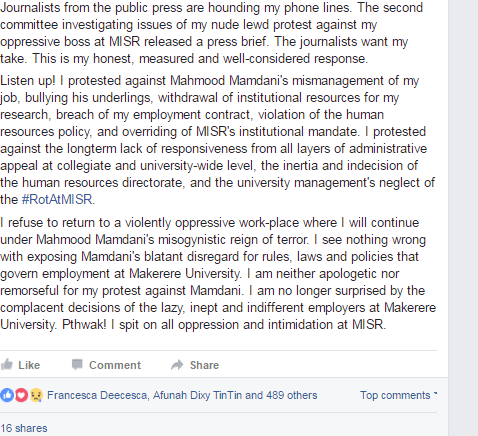