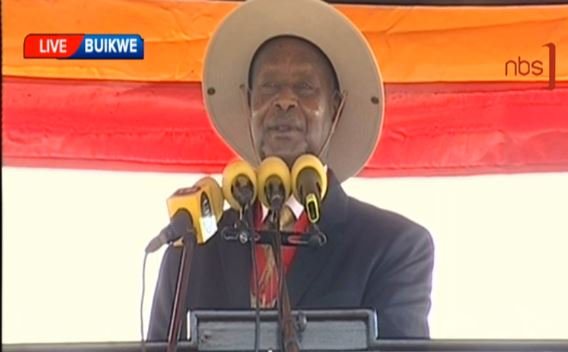 This is an unedited speech read by President Museveni during the national Heroes Day celebrations at Ssi Town Council, Ssi Sub-county, Buikwe District.

Indeed, it takes heroes to make change in society and to create visible impact. Uganda was liberated from the rule of tyranny in 1986, after a protracted struggle against the dictatorships that ruled then.  The heroes of Uganda are not only those who took to the battlefront but the many supporters of the struggle, mostly peasants. The people who sacrificed their lives in the struggle had a vision that transcended personal gain; with discipline, that saw us liberate Uganda.

I wish to salute all those that have made a contribution to the removal of the fascist dictatorships which tried to thwart our freedom by using the gun to monopolize power over society.

The dignity of Uganda and her people was restored.  Uganda is no longer the pariah state we inherited in 1986.   Thanks to that sacrifice. The National Resistance Movement secured the sanctity of human life and shall jealously protect it.

Buikwe was chosen to host this year’s festivities because of its historical contribution to the liberation struggle. Without delving much into the chaotic years, Uganda is now a proud beneficiary of the unprecedented revolutionary leadership of its liberators, the National Resistance Movement (NRM) who planted seeds of political and economic recovery that brought the country back to a better position of global competiveness. Uganda can now negotiate her position with key global players with dignity and respect.

I, therefore, wish to emphasize that, concretizing the gains of our Heroes is a duty for every Ugandan and it begins with you.

Throughout the country, there are numerous road and electricity projects that are being executed with Government funding.  We are grateful to friends from the USA, EU, China, India, etc. that have been funding or offering to fund various infrastructure projects.  These projects include Karuma, Isimba, Ayago, Oraba Rd, Nimule Rd. etc.  With discipline and the greater resources at our disposal, the future is bright.

We should discourage the thinking that all problems can be solved at one go.  Our time-tested way of solving problems is “kamu-kamu gwe muganda” ─ one by one makes a bundle.

Most of our production in Africa relies on manual labour instead of intellectual labour. Cognizant of this fact, the National Resistance Movement Government aims at providing literacy and skilling. Focusing on strategic sectors with promising employment prospects, Government is encouraging skills-development in order to fight poverty.  In addition to providing free education at primary and secondary school level, Government is laying emphasis on the study of sciences and practical skills.

In conclusion, the peace and stability that the country continues to enjoy was hard earned by alot of sacrifices and bloodshed.   The last thing we need now is indiscipline and insecurity in the country. We shall suppress anybody who tries to bring insecurity in Uganda. We paid a lot of sacrifice to reach where we are now. Anyone who deceives himself by disturbing our peace will be wasting his own time and ours because the results will be the same, we shall defeat him.

Uganda has come afar! It is unstoppable. Those who attempt to preach violence should be considered as enemies of this country and should be isolated and where possible be made to face appropriate justice.

The struggle for liberation continues.