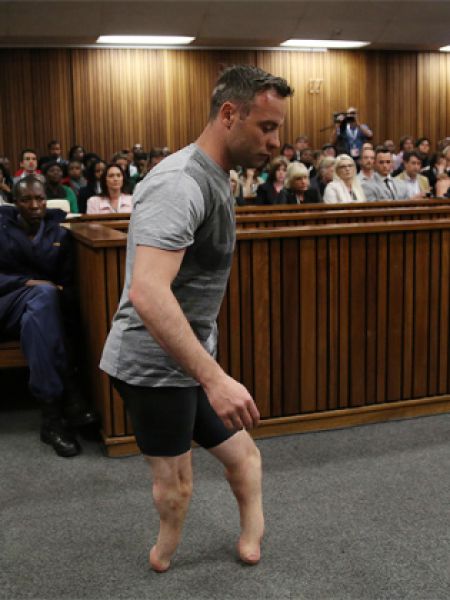 Oscar Pistorius walked in court without his prosthetics today to demonstrate his ‘vulnerability’ in a final plea for leniency.

The disgraced athlete crossed the courtroom on his stumps in a bid to show the judge he was too vulnerable to have killed his girlfriend intentionally.

Oscar Pistorius’s defence attorney, Barry Roux SC, had his client take his prosthetics off and walk for the court.

‘He is still portrayed as this person winning gold medals – a strong ambitious person,’ he said.

‘It was not a man who won gold medals that should be judged‚ but a man on stumps. A different picture would unfold.’

On the third day of Pistorius’s sentencing hearing, the court also heard the cousin of Reeva Steenkamp, who was murdered by Pistorius, say she does not believe the model ever loved the athlete.

Kim Martin told the High Court in Pretoria that she and her family have been struggling to cope since the death of Reeva, who was shot and killed by Oscar Pistorius on Valentine’s Day in 2013.

All we ever wanted is the truth,’ she said.

‘I know people said you got the truth, but we didn’t. Oscar’s version changed so many times.

She added: ‘I was very close to Reeva… I asked her: “Are you happy?” And she said to me, after shrugging her shoulders: “We’ll speak later”.