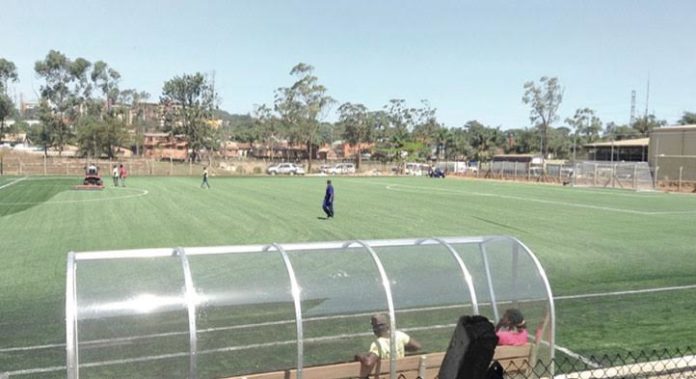 Kampala City Council Authority Partnered with the football governing boy in the country FUFA in the construction of the artificial turf.

FIFA has passed the turf fit and it will start it’s activities when next season commences.

The facility took over a period of 4 months of installation. KCCA FC’s stadium is not the first in the country but it’s the only sanctioned artificial turf that can host both the league and international matches.

The turf has a spectacular view but in spite of it’s flat levelness without bumps, it is not an easy surface for footballers to play on and it takes time to adjust to its demands.

The turf has a delicate surface that needs proper maintenance but when used properly, it offers flexibility and can withstand all kinds of weather because it cannot be waterlogged during rainy season.

KCCA FC relocated to Nakivubo stadium in Kampala as their home ground for all their remaining home games in the all football league competitions for almost half of last season since the facility was to start it’s installation.

It becomes the second artificial turf to be laid in the country. The first artificial turf was developed at the Fufa technical center in Njeru located in Jinja district.

The FIFA grant on the installation of the artificial turf pitch was aided by the Edel grass company of Holland. This is a great achievement in Ugandan football.

The turf file number is AG 6272.1. It is also certified for four years until 2020 allowing the use of it for all the official matches in Uganda.