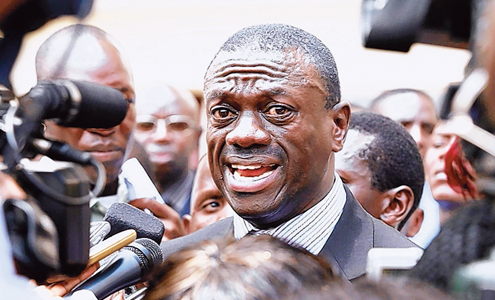 Uganda’s Judicial Service Commission has given in to the pressure of former presidential candidate Kizza Besigye and promised to ‘look into’ the suitability of Justice Steven Kavuma serving as a justice of the Court of Appeal/Constitutional Court.

Dr Besigye, who is currently incarcerated in Luzira prison on treason charges, alleges that Justice Kavuma is close to the Executive and that his professionalism is compromised.

Dr Besigye, a four-time FDC presidential candidate, recently wrote a wordy letter to the JSC, whose core mandate is to recruit and discipline errant judicial officers, charging that Justice Kavuma is doing the bidding of President Yoweri Museveni, the appointing authority.

“Judicial Service Commission has received a complaint against Deputy CJ Kavuma,” Judiciary spokesman Solomon Muyita told NBS TV on Monday. “It will be looked into.”

“JSC currently has no chair but the public can still lodge complaints. Once we have a chair, they will be handled,” Mr Muyita supplemented.

“If anyone is unhappy about the outcome, they should appeal. That is why we have an appeal system.

“The judiciary is open. That’s why we allow cameras into courts for live coverage.

Mr Besigye’s troubles with Justice Kavuma reached boiling point at the beginning of May this year when the Judge made an ex parte order placing an interim ban on the FDC’s ‘defiance’ activities.

However, Dr Besigye contends that Article 43 of the Constitution only limits one from enjoying his rights if it is in the public interest.

He also termed as ‘very strange’, a decision by Justice Kavuma to bar the magistrate at Kasangati court from ruling on whether his confinement at his residence in Kasangati by police, was legal.

Justice Kavuma has also once come under attack when, sitting as a single judge, he  on March 31, 2014, issued an order against Lord mayor Erias Lukwago’s reinstatement to office, which was issued by the High Court Judge Lydia Mugambe.

Until his appointment, Kavuma had led the judiciary for two years both as acting chief justice and acting deputy chief justice. His leadership was attacked in court, in speeches and through a lawyers’ boycott.