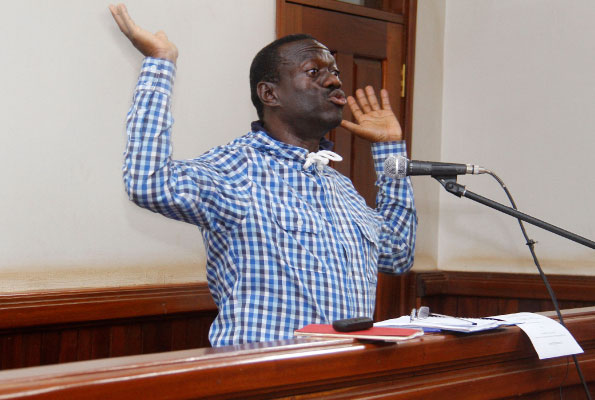 Kasangati Grade One court Magistrate Fred Egesa revealed that the DPP had presented the withdrawal letter and he has no option but to discharge.

State lawyer Joseph Kyomuhendo opted to withdrew charges against Dr Besigye of disobeying lawful orders and the jailed opposition strongman insisted this ought to be addressed as state loses interest.

Without giving details, Mr. Kyomuhendo told court that Article 120 allows the DPP to withdraw any criminal charges against any suspect. “This is not the first case to be withdrawn. Neither is it the last one,” he said.

“We have a public prosecutor who is clearly abusing his office,” Dr Besigye retorted.

“This is total abuse of power. The issue of the DPP abusing his office should be addressed. This is not the first time the state is withdrawing such a case,” he added.

The dropped case arose from the events between Kalerwe and Mulago round about in Kampala, during which prosecution alleges Dr Besigye disobeyed lawful orders from a police officer.

Prosecution alleges that Dr Besigye “willfully” disobeyed orders issued to him by Mr Daniel Bamuzibire, a senior superintendent of police, to take Yusuf Lule Road instead of driving towards Wandegeya from Mulago round about. Dr Besigye was going to FDC party headquarters in Najjanankumbi on Entebbe Road for the weekly prayers, which was a form of protest against the February general elections, which the party insists Dr Besigye, and not President Museveni, won.