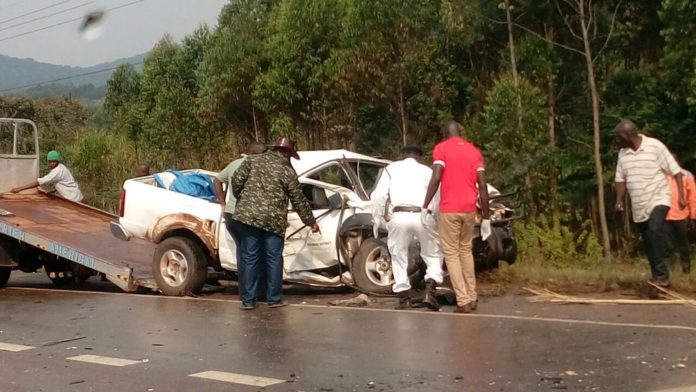 Five people are reported  died and several others seriously injured in yet another grisly accident on the Masaka -Kampala highway road in Lungala-Kkoba village near Mpigi town on Sunday.

The accident happened after a Mark II reg. No UAY 786G from Masaka collided with a NAADS Double Cabin reg. No UAR 010L.

Mpigi District Police Commander, Ahmed Kimera said Andrew Gomwe, the driver of the double cabin and resident of Rukungiri and his boss’s daughter Esther Asiimwe, died on spot while eight others were injured.  The injured were rushed to Mpigi Health Center IV for treatment.

Eye witnesses said the double cabin  was over speeding at the time of the crash which occurred at a sharp corner of the road.

Police said at least 20 people had died in an accident that occurred at Kampirigisa along the same road on Saturday.

The tragic incident happened when over four vehicles including taxis, trailer and a Toyota Noah had a head-on collision along the highway.

According to the Deputy Spokesperson Polly Namaye, the accident occurred when the driver of a speeding Toyota Noah UAS-567C unsuccessfully tried to overtake three vehicles including two taxis and a trailer.

“As the reckless driver tried to overtake the three vehicles, he had a head on collision with the trailer, swerved off the road before overturning and falling on top of the taxi UAX 718N,” Namaye said in a statement. “Most of those who died were in the taxi.”

Namaye attributed the accident to over speeding and reckless driving by the driver of the Toyota Noah.