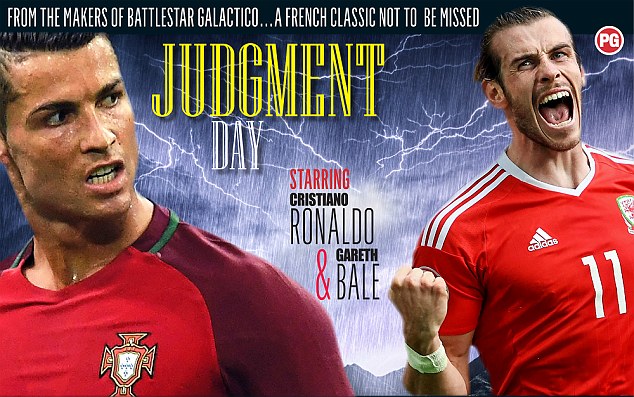 Gareth Bale leads Wales into battle against Cristiano Ronaldo and Portugal in the Euro 2016 semi-finals on Wednesday hoping to become the first British side to reach a major tournament final in 50 years.

Wales are have already surpassed all expectations on their first ever appearance at the European Championship finals by reaching the last four with a rousing 3-1 win over the highly-fancied Belgium.

However, the spectre of the Real Madrid teammates, the world’s two most expensive players, going head-to-head adds extra spice to an already dazzling encounter in Lyon.

“It’s not about two players, everyone knows that, it’s about two nations in a semi-final,” insisted Bale on Tuesday in a bid to defuse the billing of he and Ronaldo’s all-star showdown.

Despite winning the Champions League twice in three years with Madrid, Bale has tended to be overshadowed by Ronaldo in the Spanish capital, where the Portuguese is a living legend as the top scorer in Real’s history.

However, of the two Bale has been in better form in France, scoring in all of Wales’ group games and forcing Northern Ireland’s Gareth McAuley into the own goal with a devilish cross which decided their last 16 tie.

By contrast, Ronaldo has look surly, stressed and well off his usually impeccable standards in front of goal.

The three-time world player of the year scored twice against Hungary to become the only player to score in four separate European championships. But he failed to find the net against Iceland, Austria, Croatia and Poland.

“He has worked a lot for the group and that is the most important thing. He has given his all,” said the Valencia man.

“Bale is a reference for Wales just as Cristiano is for us.

“Bale knows the Spanish league, but I have also played against British teams before and I know their style. They are strong, aggressive, they attack and counter-attack very well.”

“You can’t talk about favourites in a semi-final. If Wales have got this far it is because they have deserved too. We have to have respect.”

Portugal have reached the last four despite not winning a game in 90 minutes as they were the only side to progress having drawn all three group games before Ricardo Quaresma’s 117th minute extra-time winner saw off Croatia and penalties were needed to oust Poland in the quarter-finals.

Bale, though, refused to be fooled by Portugal’s route to a fourth semifinal in their last five Euros.

“We know what tournament they have had. We have watched all their games on TV. They are a dangerous team. They are ranked very highly and are not in the semi-final for no reason,” added Bale.

“Even if they haven’t won, they’ve got the results needed. We will do our homework as normal. Hopefully on the night we can put in another great performance and make more history.”

Both sides will be disrupted by suspension with Ben Davies and in particular Arsenal midfielder Aaron Ramsey a huge miss for Wales.

Crystal Palace’s Jonny Williams is expected to replace Ramsey, whilst Davies’s absence could provoke a reshuffle in defence with Chris Gunter moving from right wing-back into the back three making way for Fulham’s Jazz Richards to make his first start of the tournament.

Portugal are shorn of the banned William Carvalho, but Gomes and Joao Moutinho are in contention to start after recovering from injury. Danilo is the most obvious option to occupy Carvalho’s holding role in midfield.