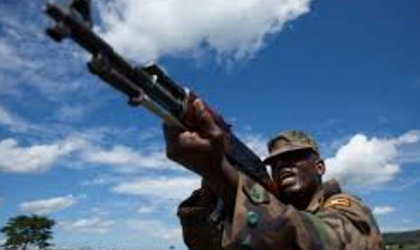 A UPDF officer whose motive is still unknown on Wednesday went on rampage in a night shootout at Masaka Armoured Brigade Barrack killing two fellow soldiers.

Private Joseph Arioni, a 1997 recruit under the army’s infantry division, shot and killed two corporals before fleeing with a gun.

Captain Benon Mutatina, the Masaka Armoured Brigade political commissar, identified the dead as Corporal Bingana and Lance corporal Kabugo who were guarding the technical store were taken out of action by Private Arioni who run off with a gun.

According to reports, the incident happened at around midnight in Kasijagirwa village, Katwe-Butego division where the barracks is located. Army Spokesperson Lt. Col. Paddy Ankunda is yet to issue a statement about the incident.The bodies of the deceased were taken to Masaka hospital mortuary.