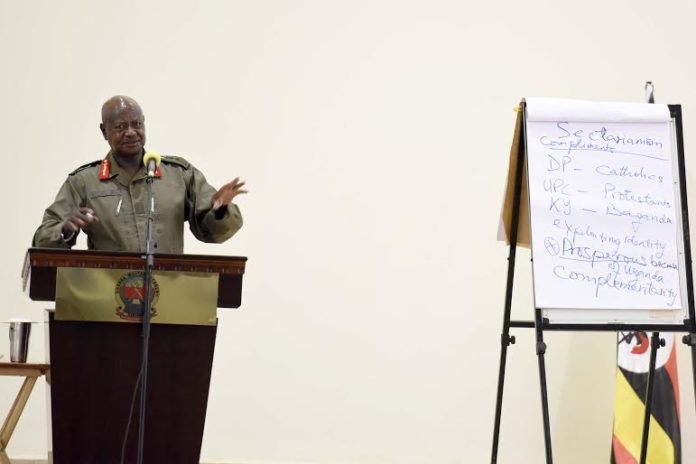 PRESIDENT Yoweri Museveni has said for Uganda to proposer and develop, its citizens must remain united and fight all forms of sectarianism.

“Unity is a prescription for the people of Uganda to be prosperous. You need patriotism not tribalism or religious sectarianism,” he said.

The President was on Friday, July 8,2016 delivering a lecture on Local, Regional and Global strategy on development to 270 officers currently undertaking a cadet course at the Uganda Military Academy in Kabamba. The officers will pass out on   Oct 5, 2016.

The President gave an in-depth overview of the principles of his National Resistance Movement (NRM) revolution and the need to always emphasize linkages between people rather than their differences. 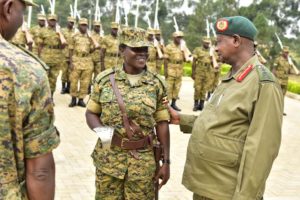 “Your country Uganda is a rich country in terms of natural resources and with a population of 38 million up from 14 million in 1986. Initially, it had problems of management disabled by wrong principles. What we need is unity, not sectarianism and tribal identity,” he said.

The President said the NRM revolution rejected the politics of sectarianism, describing it as a misdiagnosis of concentrating on identity that resulted into the collapse of the economy. He highlighted the principles of the NRM revolution as Patriotism, Pan Africanism, Social economic transformation and democracy among others calling on the officers to always be mindful of these principles for the good of all Ugandans. 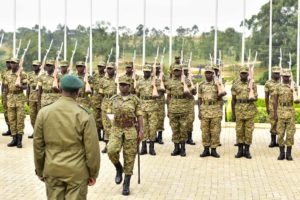 “If you don’t sort out issues of principle, it’s like being in the army without knowing how to use a compass. You can get lost. You must have principles to guide you,” he said.

On social economic transformation, Museveni called for a shift from manual to intellectual labour through education and skills in order to change the structure of society.

“We have been telling people we must have household incomes and food security. We need commercialization of the economy through modern agro production, industrialization, services, ICT and the civil service, the main sources of employment,” he said.

He called on the officers to always ask what will help them in their lives including getting education, good health, wealth creation, transport and prosperity.

He warned them against social indiscipline for a better life. 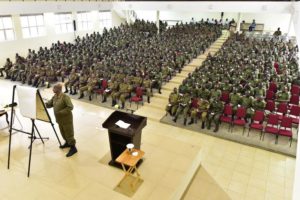 “Stay away from social indiscipline, you find people with 50 children. Instead of ranching cows, they are ranching children and then you hear them say Abaana bandemire (I have failed to look after my children).

The Academy Commandant, Brig. Emmanuel Musinguzi, thanked the President for the lecture saying it would help the cadets in their personal and career lives.

Moving a vote of thanks on behalf of other officers, Cadet Mangeni Emmanuel, said the general knowledge they got will enrich them at the academy and thereafter.