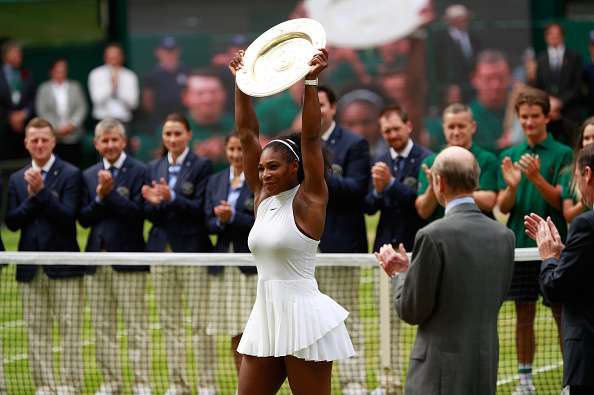 Serena Williams has re-written history at the Wimbledon. The 34 year old American coped with a gusty wind on Centre Court to win 7-5 6-3. She has now won 22 of her 28 Grand Slam finals and also moves level with Graf on seven Wimbledon triumphs, joint second in the open era behind Martina Navratilova’s nine.

Kerber had beaten Williams earlier on in the Australian Open final in January but could not produce another shock.

Right from the start, Kerber showed she was not going to be overawed. Just as she did in Melbourne, she held her ground on the baseline and served smartly to keep Williams off balance.

On a breezy afternoon, the German saved three break points in the second game to hold and received a massive cheer from the Centre Court crowd, who immediately realised they were in for a treat.

It was a match worthy of any final as Kerber, in her first Wimbledon final, pushed her all the way, scrapping for everything and using her outstanding speed to run down everything. But her defeat in Melbourne and most recently in the final at Roland Garros had hardened Williams’ resolve even further and Williams was not to be denied.

Having gone close in each of the past three grand slams and having lost to Kerber in the Australian Open final in January, the 34-year-old American edged a tight first set and then held on in the second to clinch an emotional victory and move within two of the all-time grand slam record of 24, held by the Australian Margaret Court.

But as she has done so many times in her career, she slammed down an ace, with the look on Kerber’s face saying a thousand words. She broke in the next game and then served out flawlessly to love, clinching her place in history with a forehand volley into the open space, before falling flat on her back in celebration.