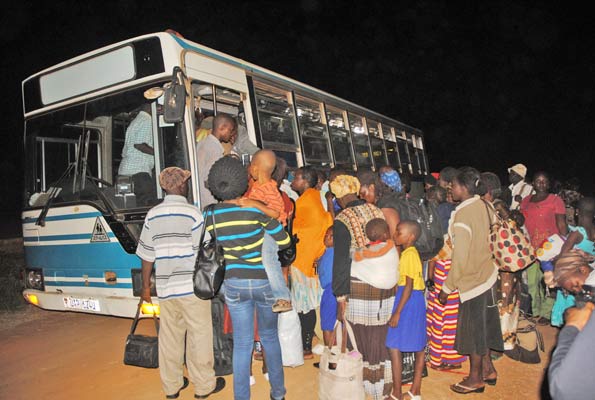 Fred Enanga, the police spokesperson has revealed that by Monday, more than 300 Ugandans had been repatriated using five buses with carrying capacity of 65 passengers each from Juba where South Sudan’s President Salva Kiir has declared a cessation of hostilities, his army chief of staff ordering troops back to barracks.

At least 15,000 Ugandans are said to be working in South Sudan. Over 200 people have died since Friday.

Many Ugandans are reportedly going back to the war tone country, especially to the capital Juba, despite the heavy fighting in some parts.

Enanga said they were liaising with the foreign affairs ministry for the possible evacuation of Ugandans who might be stuck due to the conflict.

Police has stopped Ugandans from traveling to South Sudan until the tense situation in the country is resolved.

On Sunday, Police blocked unspecified number of Ugandans and trucks from crossing into South Sudan.

So far two bodies of Ugandans killed in the conflict have been repatriated. These were identified as Dr Ben Chandinga, a 35 year old pharmacist and resident of Oriya village, Pakele Sub County in Adjumani District and Ceasar Batele, 39, a UN driver and resident of Sinveni village, Terego Sub County, Arua District.