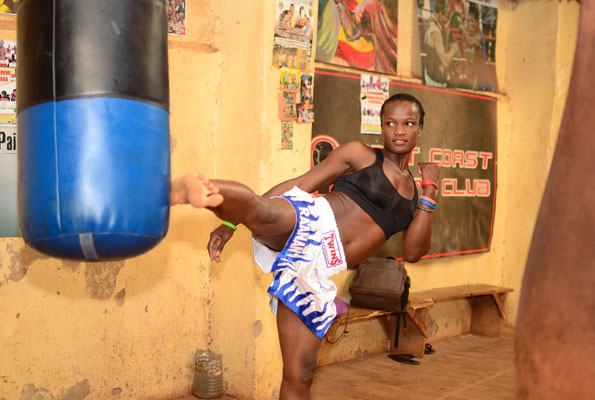 Although the first female boxing match took place in the early 1970s, women in Uganda were prohibited from kickboxing by most major organizations and licensing bureaus until the late 2000s.

Apolot was part of the HIMA Cement sponsored Kickboxing team that represented Uganda at the recently concluded World kickboxing championships in Budapest Hungary.

They returned victorious with two of the three team members winning their respective matches and titles and qualifying for the Kick Boxing World Cup to be held in Andria Italy from 14th to 19th November 2016.

Apolot beat Slovakia’s Victoria Lipianska in the full contact category while Shakey Mubiru defeated Hungary’s Sandor Joo through a unanimous decision by the three judges. Their colleague Alex Masiko lost to Csaba Gyorfy in the class A category even if he is ranked as class C.

In June, HIMA Cement handed over a 70 million sponsorship deal to the team which included a 50 million one year sponsorship package for Patricia Apolot. The rest of the cash package amounting to UGX20 million went to cover travel and other expenses for the rest of the team that comprised Alex Matsiko (International champion Lightmiddleweight) and Shakey Mubiru (Uganda welterweight champion) for the global tournament.

According to their coach Adam Boumadi, the team did exceptionally in Hungary and helped to put Uganda on the map. “This is a good team. Mubiru is new to international competition but he fought well and won his category. Alex, who had not fought for two years and had never been to Europe to compete also did well even though he lost in his category, with more opportunities like these, he should be able to go on and win many competitions.”

During the press briefing where the kickboxers showcased their trophies and the belts they won, Allan Ssemakula the Marketing Director HIMA Cement, said that the company strives to support initiatives that share the same values. “At HIMA, we identify with people that have grit, zeal, determination and a hunger for success and that is the potential we saw in this young kickboxing team. We could not be prouder to be associated with this kick boxing team because they fought strong opponents and still came out on top.”

The kick boxers are next slated to take stage on international level in September 2016.