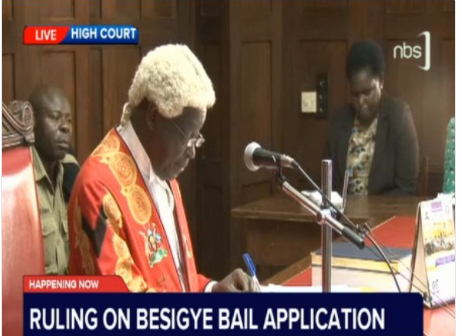 Former Forum for Democratic Change presidential candidate Dr. Kizza Besigye is at the High Court in Kampala to hear the ruling on his bail application.

In 2006, Besigye who was facing treason charges, was released on bail and appeared in court 39 times before he was acquitted.

High Court Judge Wilson Masalu Musene is today expected to rule on the bail application of Besigye who is currently facing treason charges.

Besigye’s lawyers also argued that Besigye has been on remand at Luzira prison for close to 2 months without trial and was therefore entitled to have his bail application approved.

The state represented by state Attorneys, Brian Kalinaki and Florence Akello on Monday argued that since he is a political figure with a big following, Besigye has the capacity to interfere with ongoing police investigations into his case.

The state asked court to impose stringent terms on Besigye if it decides to grant him bail.