Opposition leader, Dr Kizza Besigye has launched a scathing attack against the Uganda Police Force, calling its officers ‘incompetent’ despite the billions of money they spend.

Addressing a press conference at the Forum for Democratic Change  headquarters in Najjanankumbi, Dr Besigye said he defied acts of Police impunity when he escaped to downtown Kampala which led to his recent arrest and subsequent imprisonment.

“Those of us who chose to oppose must know the dictator’s wrath will be directed towards us by the Police, Besigye said adding: “the biggest challenge is when you are still in police custody. Police is a direct extension of the dictator because it is his arm.”

Besigye has before sought for help from the international community to put a stop to what he calls government’s continued brutality against the citizens.

Police has made it a habit to arrest Besigye, the FDC presidential candidate in the February 18 presidential elections, whenever he drives out of his house in Kasangati to go about his business.

“Whenever I am arrested, I am at ease with myself. I am always psychologically prepared for arrest and torture,” Besigye said in his first public address as a free citizen, following his release on bail on Tuesday by High Court judge Wilson Masalu Musene. 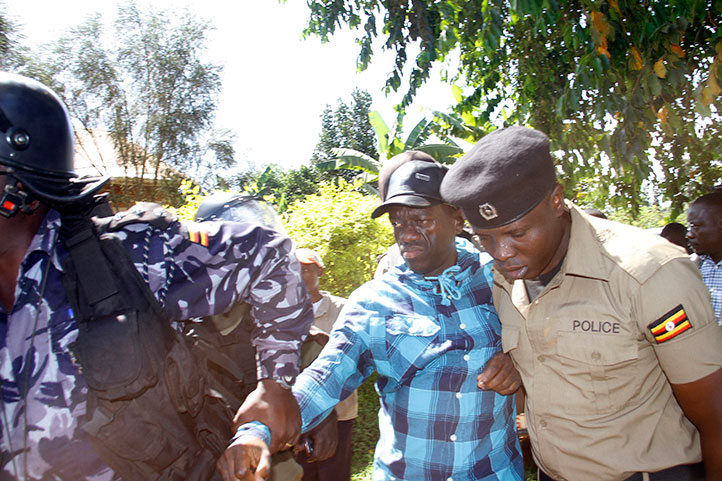 Besigye, a four-time presidential candidate, exploits and savours his cult-like status by waving to supporters from his sunroof window, often drawing ever-swelling crowds who follow his car – paralysing traffic in the process. As a ‘solution’, police then places him under ‘preventive arrest’.

The Uganda police has severally been implicated in a number of human rights abuse reports against the citizens they are meant to protect.

“The people breaching peace are the ones who should maintain it. I hope Ugandans organise and we charge these officers of their offense; if not now, at some point in the future, those officers will be held accountable,” Besigye said of officers ‘breaking the law’.

“Police taking me to Karamoja and charging me in Moroto was irregular. When I was brought to Nakawa that is why I was charged again for the same case,” the four-time presidential candidate narrated.

“In Moroto, strange things happened. All inmates were transferred to other police stations. I was the only inmate at the CPS where Counter-terrorism unit officers (the ones who wear black uniforms) were in charge of the Moroto CPS while I was there,” he said.

According to Besigye, he has reported more than 20 cases against police and other government security agencies to Uganda Human Rights Commission since he first joined the race for the presidency in 2001, but says no action has ever been taken.

Besigye adds that he has now exhausted all avenues for justice within the official agents of government to protect his rights and rights of all Ugandans.

Before Besigye headed to Najjanankumbi, James Mawanda Eremye, the Nakawa Chief Magistrate had adjourned the mention of his treason case to allow prosecution to complete its investigations into the matter. Mawanda made the ruling this morning following a request by the state prosecutor, Doreen Elima for more time to conclude the investigations.

In his ruling, Magistrate Eremye said that since the state isn’t ready to, he would adjourn the court for a longer period to allow the state to complete its investigations. He, therefore, adjourned the mention to August 12.

Earlier, Prosecutor Elima had told court that given the fact that treason is a capital offense, it requires exhaustive investigations to collect all the required evidence. She said that although the law requires that investigations are completed within six months, there should be an exception given the gravity of the matter before court.

However, in his response, Besigye asked the state to abandon the case if prosecution has failed to complete investigations and only rearrests him once the investigations are complete. “These charges they prefer against me are aimed at weakening me into submitting to this regime. I won’t,” he said. He said it is a total waste of tax payer’s money and his resources to keep dragging him to court, yet there are so many prisoners who haven’t seen a day in court, who need to be attended to.

Besigye also said because of being charged with a capital offense, he can’t even access a bank loan for his businesses.