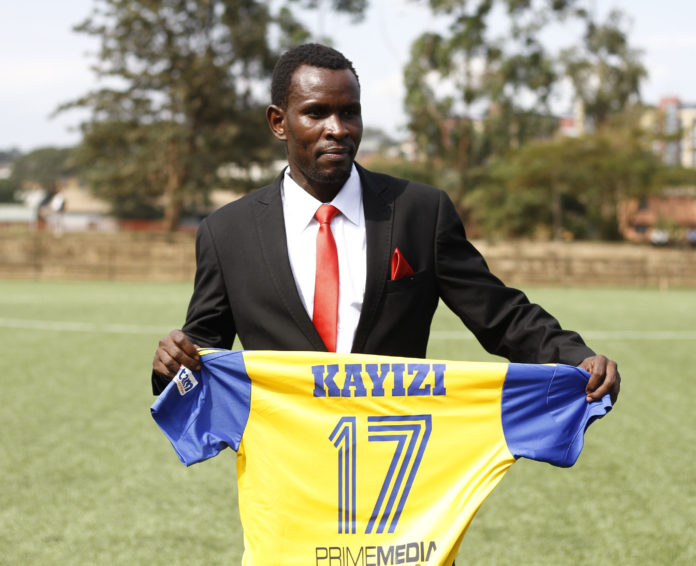 Vincent Kayizzi (born 6 March 1984) has made it clear that he will not feel under any extra pressure despite becoming KCCA FC’s most talked about signing.

Masaka born striker recently joined the Kasasiro Boys a one-year deal from Express FC on but insists that any stigma of his transfer will not be felt in his forthcoming season with Mike Mutebi’s reigning Premier League champions.

“I have never been under pressure at any club I have played and here won’t be different,” the former FK Srem Sremska Mitrovica star told EagleOnline.

“I will be my usual self at Lugogo as there is no cause to be under pressure.I am looking forward to score as many goals as possible to lift the team so we can achieve together,” the experienced right winger added.

Kayizzi, who will don jersey number 17, will vie for the right wing position with Paul Mucureezi and Julius Poloto next season in the league and CAF Champions League. He joins Geoffrey Sserunkuuma and Brian Majwega that were unveiled last week at the club.

A bonafide KCCA supporter, Kayizzi was elated to rejoin KCCA for the third time – 13 years since Mutebi gave him his breakthrough at the club.

“I know what the club expects from me and I’m not going to let down the club management for vesting their faith in me. This is a different KCCA from the one that signed me in 2003,” Kayizzi, who has been given a one year renewable contract, told the club website.

Kayizzi, is a born winner, having helped Vipers win the league trophy in 2015 and had successful professional stints in Poland and Serbia.

“I still labor with ambitions to play for the national team and I want to achieve that again in the first half of the season. I’m ready for the competition at KCCA and I hope to push the club to greater heights,” Kayizzi added.

KCCA manager Mutebi says the right winger joins the club at the right time to provide width and crosses for strikers.

“He is 30 years and can still offer four more years. When I first recruited him in 2003, he was in the same age bracket as Andreas Iniesta of Spain and Barcelona and the two have almost garnered the same experience over time,” Mutebi reminisced

He added; “I was compelled to turn to the tested players like Kayizzi to inspire young players to develop into established stars. In a nutshell, Kayizzi is a great acquisition that will lift our dressing room at the same time giving us cutting age in difficult games as we bid to retain the league trophy.