Uganda’s youngest Olympian ever embarked on his career by running to school every day.

Jacob Kiplimo, a fresh 2016 World Junior Championship bronze medalist, originates from the Sebei region, a place that dominates Uganda’s distance running and where stories of people running barefoot to school are almost a matter of every day life.

Growing up in a remote village in Bukwo, Eastern Uganda, Kiplimo would run four kilometres to and fro his school. This helped the upcoming Olympian to mould his impressive career just like his hero and mentor, the reigning Olympic and World marathon champion Stephen Kiprotich, did.

In a country like Uganda that boasts of hardly any teenage distance runners qualifying for Olympics or World Championships, Kiplimo is surely one to write his name in the history books.

On Tuesday night, Jacob Kiplimo added another line in his already fascinating story by winning 10,000m bronze at the World Junior Athletics Championships in Bydgoszcz, Poland. Competing at his biggest event thus far, Kiplimo got his teammates and a few Ugandan spectators at Zawisza Stadium on their feet when he assumed the lead with five laps left.

With just under five laps to run, Kiplimo surged to the lead for the first time, but his move did nothing to hurt the much older and experienced Kenya’s japan-based Chumo Kwemoi or Eritrea’s Aron Kifle, with the Kenyan soon surging back to the front.

With 400m to run, Chumo still held the lead and took several glances behind him as he moved through the gears on the back straight in an effort to drop the two athletes.

The first to crack was Kiplimo, who could offer nothing more on the final turn, leaving Kifle as the only one who could stop Kenya taking this title for the first time since 2010.

Kifle, Kiplimo’s biggest adversary on the day, surged up to Chumo’s shoulder on the final turn, but the moment he did Chumo found an extra gear and moved clear to take the title in 27:25.23, leaving the Ugandan in third place.

And now what remains to be seen is whether the newest Uganda star in Bydgoszcz will go on to ascend the heights in Rio.

Kiplimo first came to the limelight in May when he qualified for the 2016 Rio Olympic Games after winning a 5,000m race in Orvieto, Italy. He recorded a time of 13:24:40 to hit the Olympic qualifying mark which stands at 13.25:00.

“We are very happy that a junior athlete has managed to make it to the big stage of the Olympics. He is the youngest ever Ugandan athlete to qualify for Olympic Games,” Dominic Otuchet, the president of the Uganda Athletics Federation said then.

He said the qualification will give Kiplimo a chance to learn from the seasoned runners. 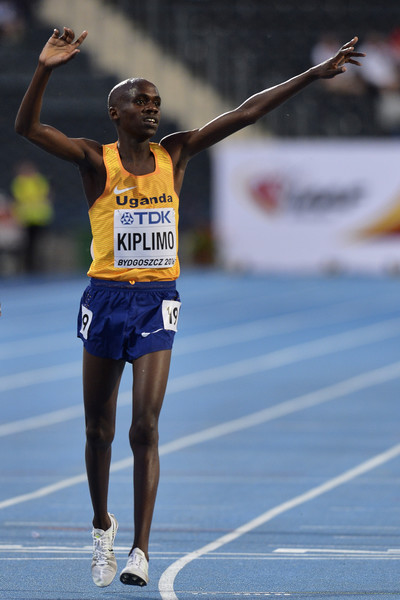 Another Ugandan runner Stella Chesang qualified for the Olympic Games after finishing third in the 5,000m race at the FBK Games Hengelo Championship in the Netherlands.

“Our target remains to have 18 athletes qualify for the Olympics. We need to have a big number so that it improves our chances of winning medals,” said Otuchet.

Kiplimo has a simple goal: to win the race. If he does, it will open up further opportunities to continue his promising running career and perhaps raise the hopes of other young runners from the East.