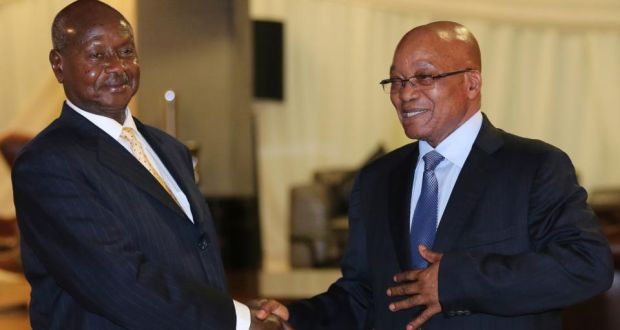 President Yoweri Museveni yesterday held a bilateral meeting with his counterpart, President Jacob Zuma of South Africa at the sidelines of the Tokyo International Conference on Africa Development (TICADVI).

Uganda has been identified as an anchor state for South Africa, particularly given its geo-political position within the East African region, its relative economic size and importance for trade with South Africa and as a destination for South African investment; and its strategic importance within COMESA, EAC and IGAD and ICGLR for purposes of deepening regional integration, continental development and regional security.

The two countries have participated as key role players in the Burundi Peace Process, with Uganda as Chair of the Regional Initiative and South Africa as Facilitator.

Uganda is currently playing a major role in maintaining stability within the region. For a number of years Uganda’s troops have formed the backbone of the AU Mission in Somalia (AMISOM) which SA supports.