The family, that has been spearheading Baguma’s arrest since he was among the 9 accused persons in the murder charges, has instead pleaded with the DPP to drop Baguma because  ‘he tireless helped them arrest’ the main suspect, Muhammad Ssebuufu. 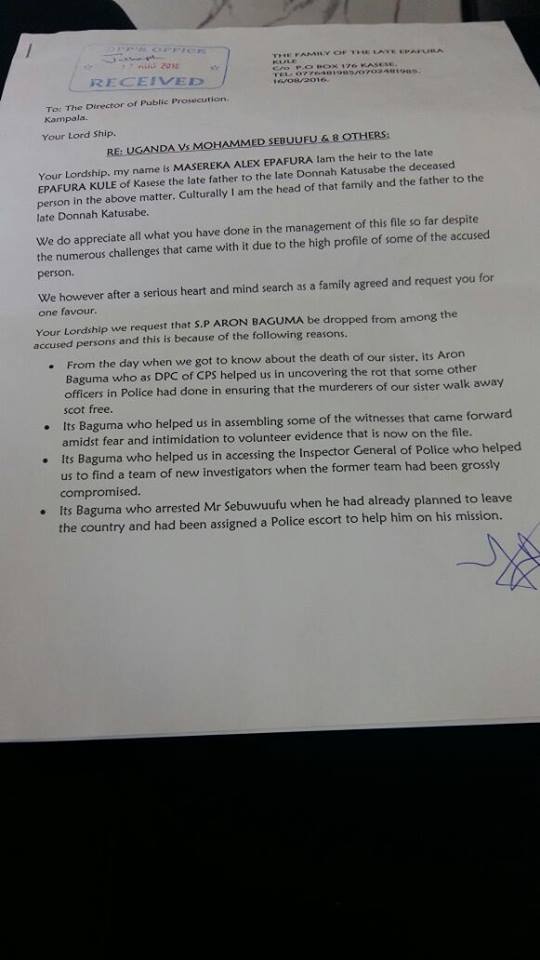 We  do appreciate all what you have done in the management of this file so far despite the numerous challenges that came with it due to the high profile of some of accused person” reads the letter from Mr Masereka.

Mr Masereka says that after a serious heart and mind searching, the family agreed and request you (DPP) for one faviour. 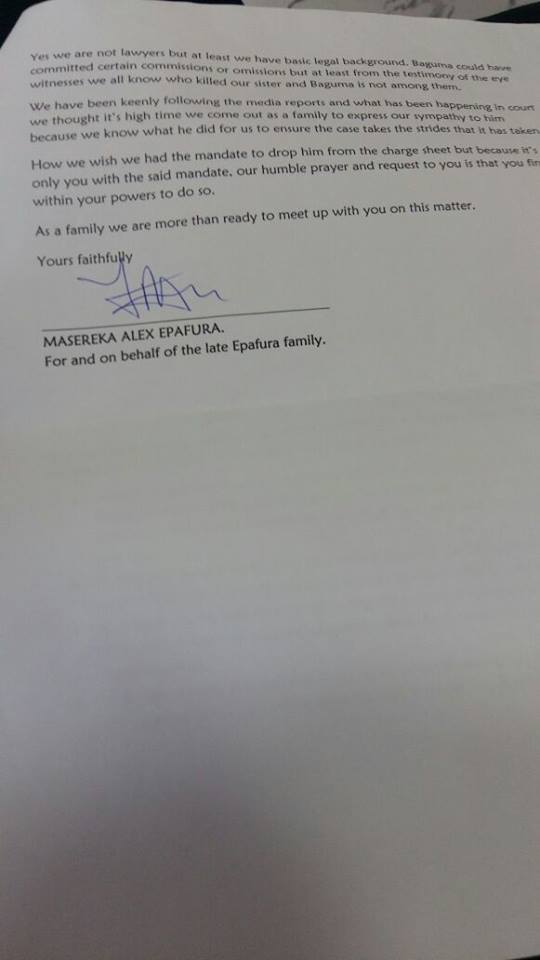 “Your Lordship, we request that S P Aron Baguma be dropped from among the accused persons and this of the because following reason: From the day we got to know about the death of our sister, it was Aron Baguma who as DPC of CPS who helped us uncovering the rot that some other officers in police had done in ensuring that the murderers of our sister walk away scot free” reads to letter to DPP.

The family further say it is Baguma who helped them in accessing the Inspector General of Police (IGP) Gen. Kale Kayihura who in turn helped them find a team of new investigators when the former team had been grossly compromised.

“It is Baguma who arrested Mr Ssebuufu when he had already planned to leave the country to leave the country and had been assigned police escorts to help him on his mission. How we wish we had mandate to drop him from the charge sheet but because it’s only you with the said mandate, our humble prayer to you is that you find within your powers to do so”

Meanwhile as the family petitioned DPP, Baguma, on this afternoon voluntarily and secretly surrendered himself to Buganda Road Court where he was formally charged in connection with the murder of Katusabe before being sent on remand at Kigo prison.

The court had on August 18, issued a warrant of arrest for the illusive senior officer after he dodged court that day. Court had given Mr Baguma up to tomorrow to be arrested by any member of the public and the police by tomorrow and bring him to court. Mr Baguma is accused of having gone to Pine Car Bond, just a few metres away from CPS, where he found the late Donah Betty Katusabe, at a car depot in Kampala being beaten and despite her pleading to him for help from her tormentors, he asked her to pay up the Shs9m debt to the car bond boss Muhammed Ssebuwufu, over a vehicle she had bought. It is said Baguma then disappeared and Katusabe was killed by her tormentors shortly after.

Sources familiar with what has been transpiring behind the scene, told EagleOnline that as Buganda Road Court issued arrest warrants for Baguma, police authorities sent a team to Kasese to meet with the family of Katushabe with a view of having Baguma dropped off the list of the 9 suspects or at least be considered for a light case preferred against him