Social media giant Facebook has rushed to court, filing ‘new’ evidence as to why it does not want to reveal the identity of ‘Tom Voltaire Okwalinga’ aka TVO, who accused city lawyer Fred Muwema of conniving with the Ugandan government to defeat justice.

According to TVO, Muwema stage-managed a break-in into his offices in Kololo, from where evidence including sworn affidavits were reportedly stolen, throwing Mbabazi’s petition into jeopardy.

In reaction, Muwema reached out to Facebook, seeking the multi-billion US giant to among other issues restrain TVO from publishing content about him and also to ‘unveil’ TVO by disclosing his identity.

Mr Muwema’s pleas did not satisfy Facebook, a development that led the lawyer to move court to compel the company to grant his wishes.

In pursuit of the legal option, counsel Muwema hired a blue chip law firm from the USA, with instructions to pursue the matter with Facebook.

Consequently, the matter that was instituted against the Africa bureau of Facebook was referred to an Irish court, since the company’s Africa operations are handled in Ireland.

The lawyers went to the Irish court with three prayers: Facebook bring down all content, ‘defamatory, malicious and false’ against Muwema by TVO; stop TVO from posting content about the lawyer; reveal TVO’s identity so Muwema can legally take him in Uganda.

And that is how an Irish judge, Mr Justice Binchy was drafted into the case, affording Muwema temporary judicial reprieve by granting a Norwich Pharmacal Order in a written judgment read on Monday, August 22. The matter was adjourned until Thursday, 6 October 2016.

A Norwich Pharmacal Order is a court order for disclosure of information issued against a third party that gets in the way of legally wrong actions.

According to court documents, Muwema lost the first two grounds but won the last which, according to legal experts, is the gist of the case that has got Facebook lawyers rushing to court with ‘additional affidavit evidence’ that also brings President Museveni’s name to light.

“It sets a bad precedent that will see many Africans and may be, even governments, sue the giant American social media platform,” the legal expert noted.

And that is exactly what the Facebook lawyers, Mason Hayes and Curran, have come up with to scatter Muwema’s ‘temporary victory’; they say that information indicates that TVO’s life is in danger should their client effect the disclosure.

‘In recent day, our client has become aware of additional matters that it believes are serious and that it is obliged to bring to court’s attention, notwithstanding that the  hearing of the interlocutory injunction application took place on Friday, 1 July 2016 and that the Court, after reserving judgment, indicated its disposition on Friday, 29 July 2016 and has now quite clearly all but completed a written judgment in respect of,’ the two-page August 19 unsigned letter titled ‘Fred Muwema v Facebook Ireland Limited: The High Court Record No. 2016/4967P,’ reads in part.

According to the lawyers, the new information contained in the additional affidavit evidence to Mr Justice Binchy that points to the danger posed to TVO’s life by the government of Mr Museveni was belatedly brought to their attention by Facebook’s Head of Public Policy for Africa Ms Ebele Okobi.

‘Since the hearing, I have also been informed by Facebook Head of Public Policy for Africa Ms Ebele Okobi that Facebook has received multiple requests from Ugandan government actors and others affiliated with Ugandan President (Yoweri) Museveni, to take down content from TVO’s page, to shut down the page and/ or to reveal TVO identity,’ stated another undated letter in August signed on behalf of law firm Mason Hayes and Curran by Jack Gilbert, the Lead Litigation Counsel for Facebook covering Asia, the Middle East and Africa (AMEA) and Asia Pacific (APAC) regions.

Contacted, counsel Muwema declined to comment on the developments, saying the case was before court. But another lawyer conversant with international law and arbitration told the EagleOnline that Facebook is supposed to neutral, adding that they are responsible for the content published on their platform. 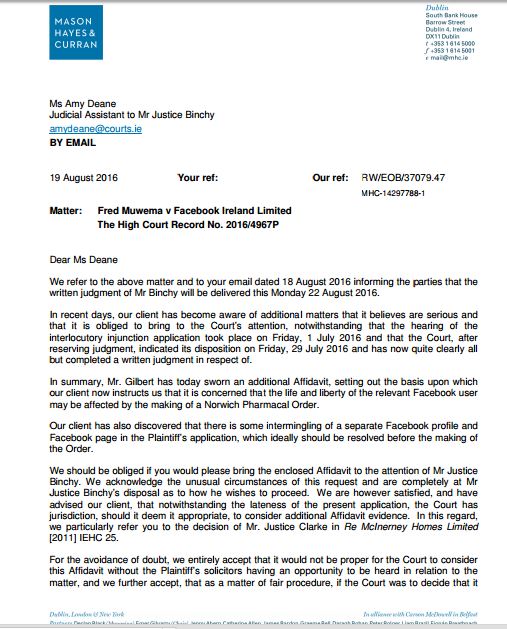 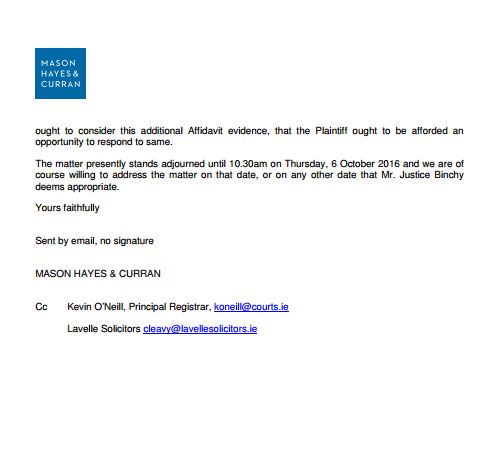