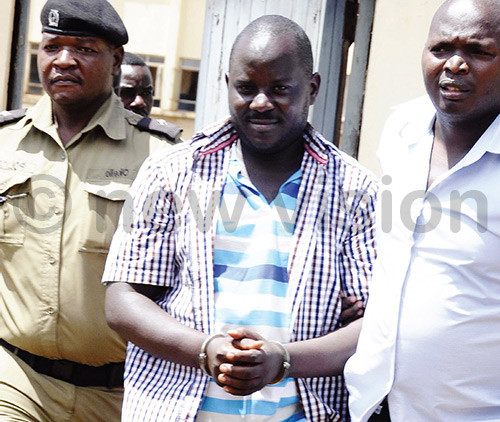 Basing on the argument that murder suspect Muhammad Ssebuwufu has a constitutional right to apply for bail since he is presumed innocent until proven otherwise and had no intention of absconding, High Court Judge Wilson Masalu Musene has this afternoon okayed his application.

Businessman Sebuwufu, the owner of Pine Car Bond on Lumumba Avenue in the leafy Nakasero outskirts of Kampala, is currently on remand at Luzira prisons, on charges of murdering businesswoman Betty Ronah Katushabe, after the deceased allegedly failed to pay him Shs9 million, the balance accrued from a car sale of Shs17 million.

His lawyer lead lawyer Peter Nsibambi asked court to use its discretion to grant him bail like it did for ASP Aaron Baguma, his co-accused and former Kampala Central Police Station commander who was released on bail by the same judge yesterday

The state prosecutor Ms Jacqueline Okui had objected to the bail application, saying the accused did not present any exceptional circumstances to justify bail. She said the claimed ground of illness should be rejected because the medical forms from Luzira Prison, where Ssebuwufu is remanded, showed that his sickness can be managed by the prison.

An earlier attempt by Sebuwufu to get bail failed after his sureties were rejected by court.

However yesterday, High Court also granted bail to Superintendent of Police (SP) Baguma. The police officer recently turned himself in after court issued a warrant of arrest against him for ignoring summonses.

Judge Musene said Ssebuwufu had fulfilled all the conditions for bail application.

Baguma and Sebuwufu are being charged alongside six other suspects for the cold-blooded torture and murder of Ms Katushabe in October last year.