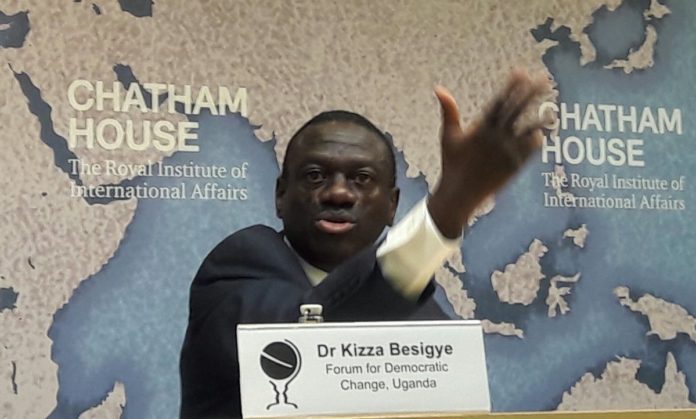 President Museveni’s four-time challenger Kizza Besigye has Friday told an influential London think tank at Chatham House that his rival has been very reckless because he thought Uganda’s oil was about to flow.

Besigye is currently on bail on treason charges.

Returning to the United Kingdom for the second time in two weeks, Dr Besigye was  impressive in his session chaired by Ben Shepherd, a Consulting Fellow, Africa Programme.

The opposition leader was making a case for a “better post-Museveni Uganda” and in his speech disclosed that that the exit strategy of Mr Museveni is not up to him but up to the people of Uganda.

“The exit strategy of Mr Museveni is not up to Mr Museveni. It’s up to the people of Uganda ,” Dr Besigye spent a better part of last week in the United States said adding, “Mr Museveni has been very reckless because he thought Uganda’s oil was about to flow, For us as the Forum for Democratic Change, the 2016 election is not yet over. We want an independent audit.”

“In Uganda, we participate in elections not because they are fair, but to empower our people but as the FDC party, our focus is to empower our youth to take back their power themselves,” Besigye told the group of about 120 that included policy makers, business representatives, diplomats, civil society representatives, media and other experts.

“If what I promise does not materialise, the people must have the right to say and get out working towards post-Museveni Uganda guaranteed with stability, inclusive and sustainable growth in the country,” he said.

“What we are doing in Uganda will serve as a template for others to regain their citizenship.

“No one can openly write a cheque to support our party, it’s very risky.