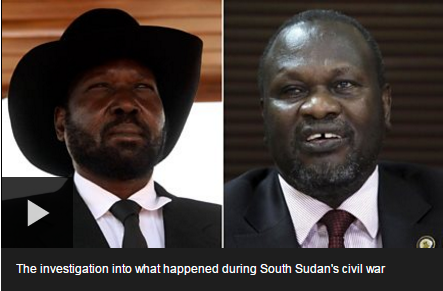 South Sudan’s political and military elite have made themselves rich while the country has struggled under a civil war of their making, a report says.

It follows the trail of money with links to the families of both Mr Kiir and Mr Machar.

Those named have not yet responded to the allegations.

The report’s authors spent two years collecting evidence and testimony on behalf of a new investigative unit – called The Sentry – which was co-founded by the US actor.

Entitled War Crimes Shouldn’t Pay, the report has found that “top officials ultimately responsible for mass atrocities in South Sudan have at the same time managed to accumulate fortunes, despite modest government salaries”.

“Some have been involved in questionable business deals while others have apparently received large payments from corporations doing business in South Sudan.”

A fall-out between President Kiir and former Vice-President Machar – the most powerful members of their respective Dinka and Nuer ethnic groups – led to the civil war which erupted in December 2013.

Terrible atrocities have been carried out by both sides – often along ethnic lines.

Mass rape has been used as a weapon of war and United Nations reports have detailed human rights abuses.

Some 2.5 million people have been forced from their homes, and millions more need food aid.

When a peace deal between the two men fell apart amid heavy fighting of the streets of the capital Juba in July, any chance of a quick resolution to the crisis crumbled.

“This war is about rival factions of a kleptocratic network trying to gain control of the state,” said JR Mailey, the author of the report by The Sentry, which is a collaboration between The Enough Project, Not On Our Watch, and C4ADS.

It says President Kiir’s wife and at least seven of his children were linked to a whole range of businesses, and has evidence that Mr Kiir’s 12-year-old son had a 25% share in a holding company.

It says a company linked to his brother-in-law, Gen Gregory Vasili Dimitry, supplied fuel to the military while he was a senior officer.

It details business connections between Gen Vasili and the Kiirs, and says that the two families hold interests in almost two dozen companies.

“I was mostly struck by the breadth of sectors in which these top officials are involved,” said JR Mailey, the author of the report.

“It seems that a very small number of people control a large swathe of South Sudan’s economy – and many of these people are also the people that are in power,” he said.

Mr Machar is accused of dealing with a Ukrainian arms company through a Russian intermediary with multiple aliases.

“What we found on Vice-President Machar, [he] had been engaged in negotiations to sell the country’s oil production for defence products – for weapons in order to fuel his rebellion,” said Mr Mailey.

“We also found evidence that a nephew of his was involved in a violent and hostile takeover of a security company operating in South Sudan.”

Among the many details outlined in the report are pictures of luxury villas, said to be owned by politicians and generals in Kenya, Uganda, Ethiopia and Australia.

It says both President Kiir and Mr Machar have luxurious homes in the same upmarket neighbourhood of Nairobi.

Mr Clooney and John Prendergast, a human rights activist, have taken a practical interest in Sudan and South Sudan over a number of years.

Their publicity campaign helped pressure the US government to push Sudan towards the peace deal which ended decades of war, led to a referendum on self-determination, and eventually independence in 2011.

Top generals are also implicated in business deals, with large amounts of money going through their bank accounts.

Army chief of staff Gen Paul Malong Awan is accused of having close business connections to President Kiir and his family and having luxury villas.

The report says Deputy General Malek Reuben Riak, and a general sanctioned by the US, Gabriel Jok Riak, had millions of dollars passing through their foreign bank accounts, despite salaries of less than $50,000 (£37,730).

The investigative unit says it tried to get comment from each of those people named in its report – War Crimes Shouldn’t Pay: Stopping the Looting and Destruction of South Sudan.

“The Sentry endeavoured to contact every individual and entity… in most cases they did not respond,” the report said.

It recommends using a “new approach to countering mass atrocities”.

“That involves using the tools of financial pressure that were developed to counter nuclear proliferation and organised crime and terrorism,” said Mr Mailey.

“We want those tools to be deployed aggressively in South Sudan. In the past these sanctions have only been applied in a piecemeal fashion and we think sanctions need to be accompanied by robust anti-money laundering measures,” he said.

An expanded international peacekeeping force for South Sudan is due to help bring a peace deal back on track, but there’s little confidence the crisis – affecting so many millions of people – will be resolved any time soon.

KfW allocates Shs326 Billion to support SMEs in Uganda and other...

Fly Emirates to showcase its Premium Economy Seats at 2021 Arabian...