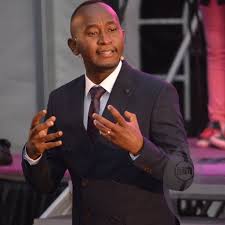 Elvis Mbonye, a self-styled ‘prophet’ and popularly known for his alleged prophecies that have always turned out to be true.

Among which, he claims  the Mabira forest wrangles in 2007, the anti-gay bill, exposure of some Pentecostal pastors’ dealings, the 2010 Kampala terrorist attacks, crashing of three UPDF choppers in Kenya and the latest being the withdrawal of Great Britain from the European Union (Brexit).

Such prophecies and the publicity he has got have won him a huge following, however, he still hasn’t got a Church of his own. For the past years he has been shifting his Church from Hotel Triangle in Kampala to open House near Watoto Church on Buganda road and later to Theatre La Bonita,  Imperial Royale hotel and finally to Aya hotel where it settled early this year.

Mbonye feels this is the time to get a Church of his own and has started sourcing for funds to buy a tent from where to pray from. However, if you have less than Shs200, 000, don’t bother making a contribution.

According to the pledge cards that have been released by Aya based hotel, Mbonye, says  the only contributions he is accepting range from Shs200,000 to Shs3 million and this has brought him under criticism from the public.

Here are some of the reactions from the public;

A prophet who issues pledge cards. You have less than 200k do not pick the card!!! I always said his clips posted on Facebook are always recorded after an event has happened. How come it’s published after such an event?? He predicts the past. That is what I have sensed.

How gullible can Ugandans be? Strangely, women are taking their spouse’s money to him… he is some kind of woman magnet

Shs30 million for a tent… Is it made in gold, has air conditioners plus free WiFi???? Why are pastors in competition with politicians these days???? This is beyond disgusting.

Since my 50k can’t be accepted. Let me send to my mum in the village . Surely I will get more blessings.

However, there are also a few people that have come to his defence. Among these include;

Arina Richard What I see is the willingness of his people to contribute to the cause. It’s their money, they are free to spend it however they please including giving Shs30 million to buy the tent. Some here seem angered simply because they would wish to have that sort of money Using the card alone is no proof he’s a fraud. Let’s exercise some wisdom. And by wisdom I mean both sides to this contentious debate.

Rita Nakyeyune Kamulegeya No one forces you to do what you will for your hard earned money. As you will read that’s a pledge card to buy a tent for people to worship the Lord. By the way this may be payable over a year and it doesn’t matter how much you contribute. We have contributed money to cancer, sickle cell drives, bringing clean water to those who need it, building latrines etc how about building the house of the Lord?