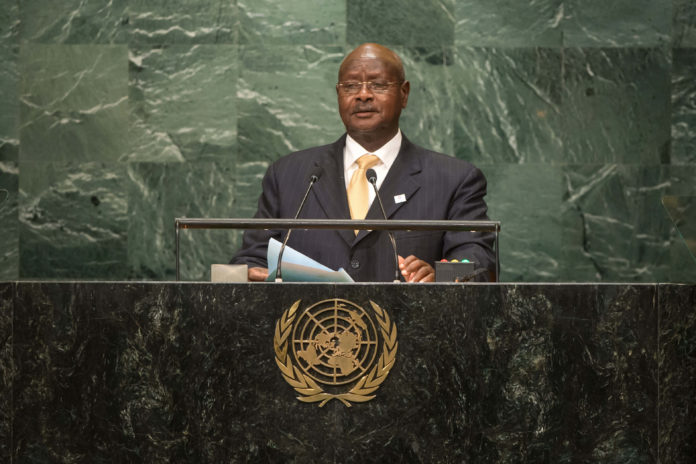 Your Excellencies Heads of State and Government;

President of the General Assembly;

I would like to congratulate you, Mr. President, on your election to lead the General Assembly during the 71st Session.

The theme of the General Assembly is: “The Sustainable Development Goals: a universal push to transform our world”.  This is a good topic.  It adds another nail in the coffin of the old parasitic arrangement where only a small portion of humanity ─ those living in the USA, Canada, Western Europe, Australia and New-Zealand, lived in affluence while the rest of the world lived in abject poverty.  The reasoning, then, was as if one could not be affluent without doing so at the expense of somebody else.  This logic has now been challenged.  Since 1981- 2010, 380 million and 207 million of people in China and India respectively have come out of poverty.  Even in Africa, a continent with a lot of accumulated disadvantages, 414 millions of people have come out of poverty.  In Uganda’s case by 2004, 56 per cent of the people were living in poverty.  Today that figure is 19 per cent.  It is hoped that by 2017, it will be reduced to 10 per cent.

The SDGs understood this well.  They are 17 of them and they are:

Although this is a different way of diagnosing and providing a prescription for the problems of under-development, we are happy that at last the global agenda captures most of the ingredients necessary for growth and transformation of societies as happened in the past for those societies that pioneered the Industrial Revolution. In particular, the inclusion of energy on the list of the SDGs is a departure from the past global agendas.

These SGDs, fractionate and put differently many of our own10 strategic bottlenecks.  These are:

(ii)    A weak state, especially the army, that needed restructuring;

(iii)   The suppression of the private sector;

(iv)  The underdevelopment of the human resource (lack of education and poor health);

(v)    The underdevelopment of the infrastructure (the railways, the roads, the electricity, the telephones, piped water, etc);

(ix)   The underdevelopment of agriculture; and

Nevertheless, there is no harm in singling out and highlighting this problem of the pseudo ─ ideology that exploits identities of people (religion, tribe, race, gender, etc) and eclipses the interests of the people (balanced trade, for instance).  That equal relationship between the producer of a good and a service and the buyer of the same, both in ancient times and modern ones, is the greatest stimulus to global prosperity.  This however, is many times eclipsed by the shallow promotion of chauvinism of religion, tribe, race or gender even when one’s religion-mates, tribe-mates, and race-mates are doing nothing or little for one’s prosperity.  Yet the recent growth through trade by China, India etc, in their interaction with the USA, EU, Africa, etc., shows the power of this stimulus.  Let the global body, therefore, understand and blacklist this pseudo ─ ideology of sectarianism and chauvinism of groups.

All the past mistakes and the present ones are linked to this problem.

Imperialism, slave trade, colonialism, neo-colonialism, the ongoing sectarian conflicts in many parts of the world, all, in one way or another, spring from pseudo ─ ideology.

The fair and authentic ideology of being “my brother’s keeper” in the Book of Genesis, Chapter 4:9 is the true antidote to this poison. Abandon all forms of chauvinism and the world will be safer for everybody.  In my dialect we say: “Karasha ngabo, imurasha” ─ “the one who shoots arrows at others, should expect arrows to come his way”.

Finally, our bottleneck number 6, the bottleneck of fragmented markets in Africa (possibly in other areas as well), should also be addressed.  It is easy to trade with China, India, the USA, Russia, Brazil or Indonesia because they are markets of 1.3 billion, 1.2 billion, 150 million, 200 million and 200 million respectively because they are societies under one political authority each.  We and the others that have fragmented markets, must struggle to rectify this deficiency.

In Africa, we are already moving.  Hence, our EAC, COMESA, SADC, ECOWAS and, ultimately, the Common Market of the whole of Africa as we agreed, recently, in Kigali, Rwanda.

Remember that when I buy what is produced by your factory, I am supporting your prosperity and when you buy what I produce, you are supporting my prosperity.

Long live the SDGs; but, please, do not forget to add the bottlenecks observed by us.