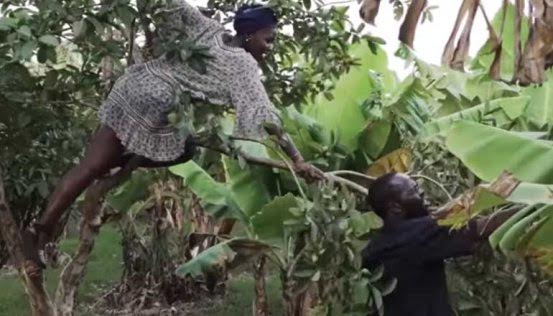 A storm is brewing in Seme, the village of Oscar award winning actress Lupita Nyong’o after she was pictured climbing a tree while donning a dress in the presence of her father.

The elders have apparently raised issue with the act which they said went overboard and is taboo in the community.

A section of the elders have reportedly called for a ‘cleansing ceremony’ terming it an abomination to their community.

In the video by Vogue, Lupita goes back to her roots, takes a walk with her father Senator Anyang Nyong’o  in Seme and cooks Ugali with her mother, Dorothy Nyong’o.

The sensational reaction on social media has been diverse,

“It is a behavior which our society does not embrace. A father is supposed to be a family role model and the head of the house and under no circumstance is a grown up woman allowed to do that,” said Leah Adhiambo.