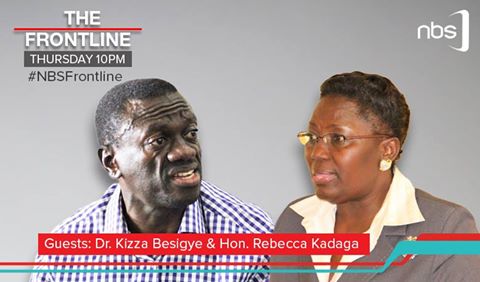 Former Forum Democratic Change presidential candidate, Kizza Besigye is set to face off with the Speaker of Parliament Rebecca Kadaga for a second time less than a month.

It ought to be remembered that the two had a steamy debate a few weeks back at the just concluded UNAA convention in Boston, US.

But unlike their first debate, that was away from home, this is scheduled to take place at home thanks to NBS TV.

The Kamwokya based station has confirmed that two are its guests this week for their weekly political program, The Frontline.

The program, hosted by Charles Odongotho airs every Thursday starting from 10pm. The other panelists on the show include former Minister of Ethics and Intergrity, Miria Matembe; Democratic Party president, Norbert Mao and government spokesperson, Ofwono Opondo.

Meanwhile, this will only be possible if he is allowed to leave his home. News that has just got to our desk indicates that Besigye, who returned to the country on Monday has been stopped from leaving his home by police.

Apparently they have told him they are under orders to stop him from leaving his house.