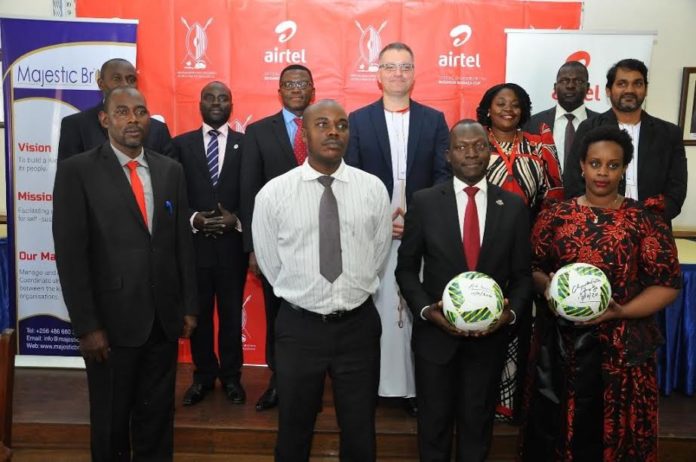 “We are very fortunate that the partners we are announcing today is one we have worked with for a couple of years – we trust them and have a very successful working relationship. Thank you Airtel,” Owek. Charles Peter Mayiga thanked Airtel for their sponsorship for the Masaza Cup.

Almost a month after the Uganda Cranes beat Comoros to qualify for the AFCON tournament, Airtel Uganda the official sponsor of the Uganda Cranes has cemented their position as the biggest supporter of football in Uganda by announcing their latest partnership with the Kingdom of Buganda.

This new sponsorship deal was announced early this morning at a press conference held at Bulange Mengo and was attended by Kingdom of Buganda and Airtel Uganda officials led by the Katikkiro of Buganda Owek. Charles Peter Mayiga and the Airtel Uganda Managing Director Anwar Soussa respectively.

The sponsorship will see Airtel Uganda provide the necessary funds to enable the tournament organizers facilitate team players, coaches and referees as well as bring on board more capable service providers.

While speaking at the press conference, the Katikkiro thanked Airtel Uganda for their unwavering support for the kingdom and its activities.

“We hold this tournament every year for mainly boosting the talent amongst the young people from Buganda Region and also to mobilise people living in Buganda in development programmes and activities that boost their income levels.” he added, before thanking the Kabaka for his support and participation in the Masaza Cup tournament.

The Airtel Uganda Managing Director, Anwar Soussa expressed excitement at the opportunity to be part of the kingdom’s football heritage.

“At Airtel Uganda, football is one of our passion points, right from Airtel Rising Stars, our youth football tournament all the way up to the Uganda Cranes, our national football team. It is an honor to add the Masaza Cup – a Kingdom of Buganda legacy tournament that was started very many years ago and has raised some of the greatest talent in the country,” he said.

“I commend the Kabaka of Buganda and all the kingdom officials for your ability to keep alive this tournament and your noble desire to unify the kingdom subjects,” he added.

Soussa also used the opportunity to congratulate Buddu County who won the 2016 Masaza Cup.This will not be the first time Airtel Uganda has come out to sponsor kingdom of Buganda activities. Last year, the telecommunications company renewed their partnership with the Buganda Kingdom for the next three years to cater to four of the most important Buganda Kingdom activities; the Kabaka Run, Kabaka’s birthday, the Kabaka’s coronation as well as Eid El Fitri.